The Mystery Deepens in the Enigma known as Skeleton Lake 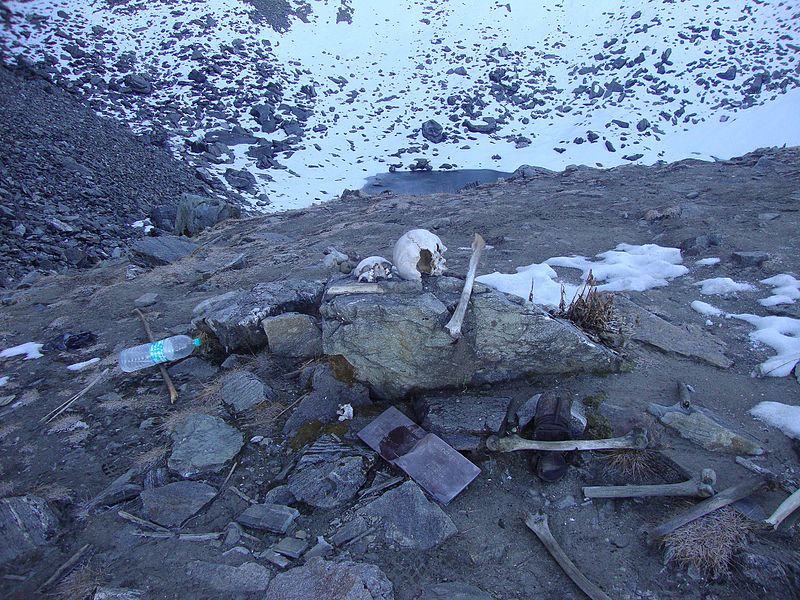 There’s a glacial lake in the Himalayas that holds a dark secret, in the form of the over three hundred unidentified human skeletons that reside there. The identities of the individuals that perished in and around the tiny lake have perplexed experts for decades—who were they, where did they hail from, and perhaps most importantly, what deadly event did they succumb to? A new genetic survey of some of the bones at the bottom of India’s Roopkund Lake—nicknamed “Skeleton Lake”, for obvious reasons—has only served to deepen the mystery, as the individuals’ origins appear to be spread as far west as the Mediterranean, and the timing of their arrival spread over the course of a millennium.

Only accessible for one month during the summer melt, the mystery of Roopkund Lake was revealed to the modern world in 1942, when a Nanda Devi game reserve ranger encountered the lake’s numerous skeletons. Initially, British authorities feared that the skeletons were the remains of a covert Japanese invasion force, lost to the harsh environment of the Himalayas, but upon examination the corpses were found to be too old to be those of Japanese soldiers.

A local legend tells of the doomed pilgrimage of the King of Kanauj and his entourage were killed by a violent hailstorm sent by a goddess who was angered by the procession’s trespass into her sanctuary at Roopkund, their bodies still residing in the lake. Indeed, a 2004 expedition found that many of the skeletons had impact wounds on their skulls and shoulders, as if something rounded had struck the individuals from above.

To date, the remains of over 300 individuals have been discovered at Skeleton Lake, including their belongings, amongst them items such as rings, spears, leather shoes, and bamboo staves. The artifacts, along with the bones of their owners, are well preserved by the ice that covers the location for most of the year, and can be readily seen after the ice recedes in the summer, including those located at the bottom of the two-meter (six-and-a-half foot)-deep lake.

“Through the use of biomolecular analyses, such as ancient DNA, stable isotope dietary reconstruction, and radiocarbon dating, we discovered that the history of Roopkund Lake is more complex than we ever anticipated,” said geneticist David Reich of Harvard Medical School.

The individual genomes of 38 skeletons were sequenced for the study, and the researchers found that they fell into three distinct groups from very different places: 23 individuals had DNA similar to that of people across modern-day South Asia, including the countries of present-day India, Pakistan, Nepal, Bhutan, Bangladesh, and Bhutan, implying that although the individuals were from around the Indian Subcontinent, they did not originate from the same community. Radiocarbon dating also placed these individuals’ deaths between the 7th and 10th centuries CE, suggesting that not all of them arrived in Roopkund at the same time.

But the origin of the second largest group was a major surprise for the researchers: 14 individuals had DNA similar to people living in present-day Crete and Greece, a discovery backed up by the dietary reconstruction performed on these skeletons. The individuals from this group appear to have arrived sometime between the 17th and 20th centuries CE, an extremely recent event (or series of events) for the region’s history.

The third group, while also arriving at Roopkund Lake during the same timeframe as their Mediterranean counterparts, came from the opposite direction, somewhere in Southeast Asia, possibly related to people in present-day Malaysia or Vietnam.

“We were extremely surprised by the genetics of the Roopkund skeletons,” said evolutionary biologist Éadaoin Harney of Harvard University. “The presence of individuals with ancestries typically associated with the eastern Mediterranean suggests that Roopkund Lake was not just a site of local interest, but instead drew visitors from across the globe.”

At an elevation of 6,800 meters (22,300 feet) and far from the traditional routes of the Silk Road trade network, the reason as to why so many groups and individuals passed through—and died in—Roopkund Lake persists as a tantalizing enigma. The 38 skeletons examined in this recent investigation only represents roughly one-eighth of the remains found in this graveyard of mysteries, and the research team plumbing its depths is hopeful that future investigations will unravel the puzzle that is Skeleton Lake.

Subscribers, to watch the subscriber version of the video, first log in then click on Dreamland Subscriber-Only Video Podcast link.
2019-08-30
Previous Headline News Post: Russian Nuclear Accident Involved a Nuclear Reactor, According to Experts
Next Headline News Post: Once Again, Scientists have Underestimated the Pace of Global Warming: Is This Due to Unintended Bias?