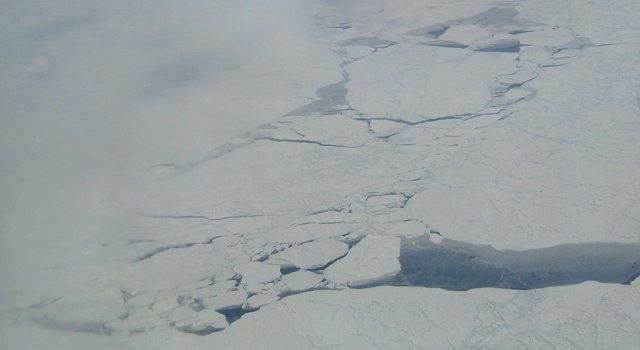 One of the more prevalent dangers posed by the accelerated warming of the Arctic is the release of methane, a powerful greenhouse gas, from thawing permafrost. A team of Russian scientists from the Tomsk Polytechnic University (TPU) have reported discovering at least two powerful methane plumes rising from the floor of the Arctic Ocean, a troubling indicator of the state of warming in the Arctic.

Typically, researchers would search for such methane fountains using specialized sonar equipment, taking advantage of the change in water density that the presence of the gas creates, in a search that “is more complicated than finding a needle in a haystack,” according to Sergey Nikiforov, a spokesperson for TPU. However, on this expedition the researchers were able to spot the first fountain from the deck of their research ship, the R/V Akademik Mstislav Keldysh, with their own eyes, while cruising the East Siberian Sea, 150 nautical miles (278 km, or 173 miles) east of Bennett Island.

“On the right side of the Keldysh, they saw a spot of emerald color against the background of dark water,” roughly 5 square meters (54 square feet) in area, Nikiforov explained. “Approaching it, scientists were able to observe how gas rises from the black depths of the sea to the surface with thousands of bubble filaments.”

Although the researchers were equipped with specialized collection equipment to gather gas samples with, the methane concentrations were high enough that they wound up using buckets to scoop samples of water that were “boiling” with methane for analysis, and were even able to pump compressed gas into several cylinders directly from the seep itself.

“This is the most powerful seep I’ve ever seen,” exclaimed TPU professor and expedition head Igor Semiletov. “It is manifested by an increase in methane concentration in air up to 16 ppm, which is 9 times more than the average planetary values. No one has ever registered this before!”

This powerful methane seep wasn’t just a one-time occurrence, as the research team encountered a similar seep the next day, and between the two sites were able to perform a comprehensive examination of the phenomenon. Semiletov also remarked that in the 46 Arctic expeditions he has participated in, he has never encountered methane seeps of this magnitude.

Subscribers, to watch the subscriber version of the video, first log in then click on Dreamland Subscriber-Only Video Podcast link.
2019-10-16
Previous Headline News Post: An Underwater UFO Stole a Torpedo Out from Under a US Navy Recovery Team
Next Headline News Post: Green is Good for the Environment, and the Economy Too