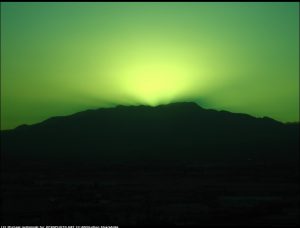 It turns out that the Pentagon’s Advanced Aerospace Threat Identification Program (AATIP) is still not only up and running, it is also collecting UFO reports from military sources “almost daily”, according to KLAS-TV investigative reporter and Peabody Award recipient George Knapp. And the military’s involvement with the UAP phenomenon may run even deeper than recent U.S. Navy announcements have let on, according to  Colonel John Alexander, whom estimates that thousands of high-ranking military officers may have personally encountered UFOs.

Speaking in an interview with KNPR Nevada Public Radio, Knapp said that AATIP and the Advanced Aerospace Weapons Systems Application Program (AAWSA) are not only still actively investigating UFO reports, but they do so on a near-daily basis. AATIP is the (formerly) secret UFO program started by the Pentagon in 2007 (and reportedly defunded in 2012); AAWSA is AATIP’s civilian counterpart, part of Bigelow Aerospace’s Bigelow Aerospace Advanced Space Studies (BAASS) program.

“I think that the study that AATIP, AAWSA, what is still underway, is still trying to figure out where these craft are from, the nuts-and-bolts craft that are encountering our military, I am now told, almost daily, off the East Coast of the United States” Knapp said. “Almost daily. And we don’t know the answer.”

The issue of UFOs has recently become a hot topic in Congress, Knapp said. After the revelation of video footage taken by Navy F/A-18 fighter pilots during a series of encounters UFOs and the Nimitz Carrier Strike Group in 2004, and the existence of the AATIP program itself, Congressional staff members started asking questions, including, according to Knapp, “interviewing Navy pilots, the aviators themselves, very credible people, credible witnesses, who had backup data, radar data, about these encounters.”

As a result, elected members of congress became involved with briefings on the subject, and this involvement may have led to the U.S. Navy’s decision to implement new UFO reporting procedures, announced in late April.

Featured in the same KNPR interview was retired Army Colonel John Alexander, who also weighed in on this shift in Navy policy, and is questioning why there hasn’t been more official interest in the subject of UFOs, in light of how often encounters with military personnel occur.

“My guesstimate is that there is about 6,000 flag-grade officers between the time of Blue Book and now, probably, 7 to 10 percent of them have actually seen UFOs. So, my question has been really: Why hasn’t there been more studies?” according to Alexander.

Recalling one meeting with a “Director or Deputy Director of all those three-letter agencies”, Alexander said that he was told by the Director in question that “A, we don’t do that, there are no requirements to study UFOs; but B, I’ll tell you about the ones I saw.” But despite this Director’s personal experience, it apparently still wasn’t enough of a reason to launch an investigation.

Alexander also reiterated the fact that, at least previously, discussing UFOs could prove toxic to the career of anyone that ventured into the subject. Additionally, personal belief systems, including religious fundamentalism, has also played a role in preventing the launch of a number of investigations.

“The religious issue has popped up in more than one area of phenomena where they’ve come out and said, ‘Hey, you can do that but it’s the work of the devil – hands off,'” Alexander said.

Knapp also commented on the current controversy regarding the origin of UFOs—are they from outer space or not—and why the current trend is for ufologists to distance themselves from the extraterrestrial hypothesis.

“Since this current media wave has started, I’ve seen at least a hundred interviews with skeptics and debunkers and some ufologist who don’t like all the attention that it’s getting that takes away from whatever their pet theory is at the moment, and they all say the same thing, ‘Well just because they’re unidentified doesn’t mean they’re space aliens.’ Well – Duh, of course not!

“All those studies that John [Alexander] and the guys at NIDS did, they were doing what scientists and investigators are supposed to do, they’re pursuing the unexplained, not explaining the uninvestigated, you know, they’re trying to figure it out,” Kanpp continued. “They don’t really know where these things are from, and I don’t know anyone in the military or government who does know. And you risk your credibility if you allege that they’re space aliens because we don’t have enough information to prove that.”
John Alexander, the author of “Reality Denied: Firsthand Experiences with Things that Can’t Happen–But Did”, is a frequent guest on Dreamland, and subscribers can access his interviews in the Dreamland Archive.
Image Credits:
News Source:
Dreamland Video podcast
To watch the FREE video version on YouTube, click here.