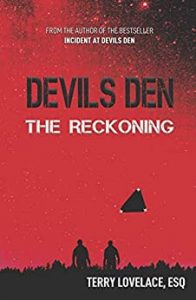 Along with a friend, Terry Lovelace experienced an abduction at Devil’s Den in Arkansas in 1977. He tried to put it out of his mind until 2012 when a fall in 2912 caused him to

have an X-ray of his leg. A complex anomalous object was observed embedded in his leg above the knee. It had been there since the experience and had left a “numb spot” in his leg which he had ignored. According to the radiologist who examined the x-ray, the object appeared not to be natural and resembled an RFID device.

In this interview, you will hear descriptions of what has become one of the most studied and extensive close encounter cases in history. It includes a number of instances of physical contact with what appears to be an alien, who has visited Terry from time to time. Like Whitley, he has gone from terror to acceptance and now no longer fears the experience.

Prior to the show, you will hear Whitley describe an anomalous sound that appears at 34:40 in the subscriber version. The sound is unusual and analysis has so far failed to identify its source.

This is just a fascinating show, a terrific journey into the unknown!

Not a subscriber? WE NEED YOU DESPERATELY. Please join now. Click here to explore our plans.

Subscribers, to watch the subscriber version of the video, first log in then click on Dreamland Subscriber-Only Video Podcast link.
2021-01-29
Previous Headline News Post: Harvard’s Top Astronomy Professor Is Convinced That ʻOumuamua Was an Alien Spacecraft
Next Headline News Post: Magnetic Fields Appear To Affect Quantum Processes Within Our Cells