Dr. John Brandenburg on the horrendous and violent past of our sister planet Mars. Was Mars murdered in an atomic holocaust millions of years ago? The evidence will horrify you.

John Brandenburg and Whitley Strieber have a long association, going back to the earliest days of study of the Mars face. Listen as John tells of findings that JPL and NASA simply will not face–and explains the science that supports his startling claims.

If John is right–and the evidence is very powerful–then we don’t understand our past at all, and remain in ignorance at our peril.
END_OF_DOCUMENT_TOKEN_TO_BE_REPLACED 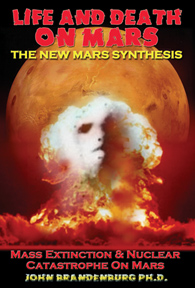 Riveting new information about Mars this week. Why are there indications that an enormous nuclear explosion might have taken place on Mars eons ago? What caused Cydonia to look like an archaeological site? Was Mars ever earthlike? Dr. John Brandenburg lays out evidence for a huge nuclear explosion that essentially destroyed life on Mars.