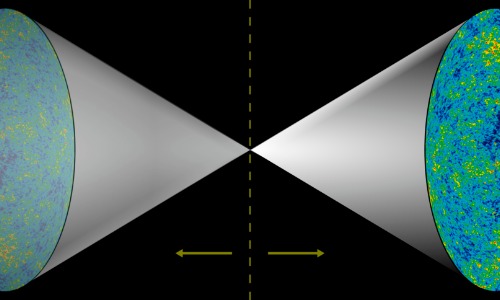 The particles that make up the Universe around us are out of balance, and physicists are searching for a cause.  Following the Big Bang, there should have been an equal number of particles that mirror one-another.  I.e. there should be just as much antimatter in the universe as there is END_OF_DOCUMENT_TOKEN_TO_BE_REPLACED

NASA’s new GBM telescope has detected beams of antimatter produced above thunderstorms on Earth by energetic processes similar to those found in particle accelerators. Scientists think the antimatter particles are formed in a terrestrial gamma-ray flash (TGF), a brief burst produced inside thunderstorms that has a relationship to lighting that is not fully understood. As many as 500 TGFs may occur daily worldwide, but most go undetected.
END_OF_DOCUMENT_TOKEN_TO_BE_REPLACED

At CERN, the particle collider in Geneva, scientists have captured antimatter atoms for the first time. Until recently, many physicists weren’t sure that antimatter actually existed, except in the theory that postulates that during the Big Bang, when the universe was created, matter and antimatter were produced in equal amounts. But antimatter is hard to isolate because matter and antimatter destroy each other instantly, on contact, in a violent flash of energy. END_OF_DOCUMENT_TOKEN_TO_BE_REPLACED

Physicists at the Cern particle accelerator in Geneva, Switzerland, have mass produced antimatter, which may solve one of the greatest mysteries of the Universe. Antimatter is the mirror image of ordinary matter and both should have been created in equal amounts at the birth of the Universe. Scientists don’t understand where all the antimatter is?since the matter around us is mostly made up of ordinary matter.

The antimatter is short-lived, since it’s destroyed when it collides with normal matter. When this happens, both turn into bursts of radiation, and scientists believe this process was crucial to the creation of the earliest stages of the Universe billions of years ago.
END_OF_DOCUMENT_TOKEN_TO_BE_REPLACED