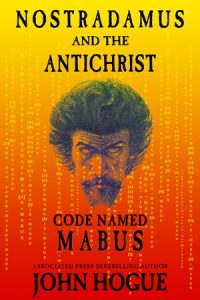 John Hogue returns to talk prophecy and explain to us how he managed to correctly predict that Donald Trump would be the Republican presidential nominee back on January 8, when talking on Dreamland about his book Trump for President: Astrological Predictions.

He’s back to discuss the soon-to-arrive Trump-Clinton campaign and to tell us why their stars make it a much harder contest for him to predict than most—and this bearing in mind that he has correctly predicted the last 13 presidential winners, dating back to 1968.

We go beyond the election to talk about his update to one of the most uncannily predictive books he has ever written: Nostradamus and the Anti-Christ. Prepare to be astonished and chilled to the bone when you hear the logic behind his growing belief that Nostradamus’ third antichrist may already have lived and died, meaning that we are looking right now at the 25 years of upheaval that are predicted to follow his death.

Please note that Trump for President: Astrological Predictions, does not advocate on behalf of a Donald Trump presidency. It is politically neutral.

John Hogue has a long and fascinating history with Dreamland. Subscribers can listen to his previous shows here.

There have been some hysterical emails saying that John Hogue calls President Obama the anti-christ. This is false. Here is his statement on this controversy:

Barack Obama’s name easily translates into the code name for the Third Antichrist of Nostradamus. Take the correct Swahili phonetic pronunciation “oobama” to create “ubama.” Re-arrange the letters to make “maabu.” Replace the redundant “a” with the missing “s” to complete the puzzle and you get “mabus.”

As a scholar of prophecy, I cannot be swayed by personal opinions for or against this fact: his name converts easily to “Mabus” therefore, as a world leader, pivotal in influencing history in the region where Mabus is said to have an impact–The Middle East–requires I add him to five other chief candidates in my book, “Nostradamus and the Antichrist, Code Named: Mabus.”

Now then, it is an occupational hazard of balanced prophecy interpretation that one will be praised by half the readers and cursed by the other half because most readers are seeking answer from the future that only satisfy  their unconscious biases for or against certain outcomes. Some of those among your readers who identify with being Democrats will not be happy that Obama is a candidate. Some of your readers who are Republicans will not like that G.W. Bush is also a candidate. Some of your  Muslim readers will not like the fact that four chief candidates are from Muslim lands, and so it goes with bias.

I would suggest to anyone who has a problem with my interpretations they ought to do themselves a favor and actually “read” my book before passing judgment based on mere unsubstantiated opinion because ignorance is a servant of what is “Antichrist” in our world.