After 28 Years, I Return to the Cabin 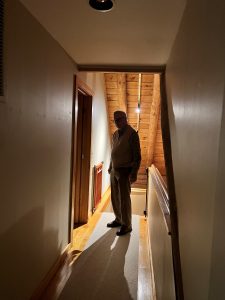 On an October morning in the mid nineties, Anne and I got in our car and drove down the driveway of our cabin for the last time. My book sales had been declining for years. We simply did not have enough money to both keep our son in school and pay our mortgage. (It was just as well. After the premiere episode of Southpark lampooned me in 1997, my sales dropped through the floor. We ended up taking bankruptcy. At times, we had to borrow money from friends to keep going.)

On that morning, we told each other that we would never return. Could never bear to. For years, I suppressed every memory, every thought of the place. But something came up that caused me to feel an obligation to return. (More on what that was in a later post.) I had to go to the cabin.

Because times are changing and there are now many people who have realized that I have a worthwhile story to tell, and I know how important this story actually is, I decided that it was time to face my memories and my ghosts.

On February 22, I went back. As I flew from Los Angeles to New York, I was in a dark mood. By the time I got into the rental car, I was apprehensive and startlingly sad.  As I drove toward the cabin, all the emotions of loss and the black despair I had on the day we left re-emerged. I was reliving my loss as if it had happened the day before.

We went down the long driveway to the cabin. As we approached the gate, I saw that it was exactly the same as the day we left. Only the gate code had been changed. The gate rolled open and we headed up to the house.

And there it was, the home of my happiness and my great adventure. And it was no longer mine–my precious gateway to other worlds and the great mystery that surrounds it belonged to somebody else now.

What would the new owners be like? I had already been told that they hadn’t had experiences. But that was no surprise. After all, the visitors had wasted no time in following me to Texas when we left. You will find this mentioned in Super Natural and other places.

It was so lovely, a marvelous great log home. The sadness now became like a great, dark wall. How could I enter? How could I bear this?

Standing in the doorway was a young couple. They stepped forward. I saw warm eyes, and I saw the kind of open, true greeting that you do not often see in our world. They took my hands and welcomed me into their home that was once my home and remains the home of my heart.

Incredibly, impossibly, I was actually back in the family room where so much of my family happiness had unfolded, so much warmth and love. And here were these two warm, profoundly dignified human beings welcoming me. I thought to myself that the house has attracted some truly lovely people.

I remembered this room in our days, watching baseball games, playing Monopoly, our son’s young friends as our guests. I heard the voices and the laughter echo in the silence that has been within me since that last day. I felt the love in this house, and in that moment, I fell in love with a family that I had only known for seconds. When we shook hands, their touch instantly belonged to my heart.

At the same time, the sadness was now so overwhelming that it almost caused me to break down into tears. But these warm, sweet people–they truly welcomed me. They embraced me with the kindness in their eyes.

As I walked through the house with them, they showed me a poster they’d had made of the cover of Communion, that now hangs in the old basement library where I spent so much time reading before the fire.

As we went upstairs, I walked past the meditation room where the barrier between the living and the dead had been pierced. I walked through the master bedroom where the implant event had taken place. This was their bedroom, but they gave it to me for the night.

Bedtime came and I changed into my pajamas in the master bathroom, as I had done so very many times so long ago. I went into the bedroom. It was full of cameras, but placed discreetly enough that I could sleep.

I slept until about a quarter of three, then did the early-morning meditation in a chair beside the bed.

The next morning, we went down to the circle of stones I’d built to commemorate the original contact experience on December 26, 1985.

The Whitley of the past–that old story–is now told. Another Whitley is present now, with a new story to tell, which is the next story, of the path to contact and what comes later and will redefine what it means to be human, that Anne so accurately and presciently called communion: the acceptance of the hidden into the known.

That night, I was to stay in the cabin alone, a precious chance for me.

The young couple had returned to their city home. By text, they suggested a restaurant for me. I took them up on it, and after I finished dinner, the server told me that they had paid for my food. I was surprised, then not. It was just the sort of thing they would do.

When dawn came, I awoke to its gray breaking. As I gazed out the windows beside the bed, watching the pines across the driveway slowly take form, it was as if the twenty-five years had never even happened. I was home. Then I remembered: this is not your place any more. That hit hard. But the sense of welcome I’d felt from the new owners immediately reappeared. I know now that I can return, an extraordinary blessing for me.

But it was time to leave. I dressed and packed, and drove out into the gray winter morning. Yet again, I crossed the mountain.

Then came the drive back through the foggy dawn, the passage through a bustling airport, the roaring, constricted flight, and back to see relatives and do the Archives of the Impossible conference in Texas.

My beloved aunt, among last of her generation in our family, greeted me in her gentle way and I returned to the embrace of my family, my brother and cousins and friends of all my life.

As always, the mystery of the visitors came with me. At three this morning, I was awakened by a kiss or touch brushed along my upper lip. When I got up to do the sensing exercise, I felt embraced by this dangerous lover and teacher of mine. Clear in the strangeness, Anne’s presence was strong, holding and sustaining.

I saw that I had come to the end of a long, dark journey. I have left the anger and regret behind, replacing it with love for the people who now possess the cabin. He is a student of the place already, studying its archaeology, I think to connect with the ghosts of the native people who still walk this land, waiting for the day and hour that they may return.

This noon in San Antonio, I went to lunch with my aunt and her daughters, in a local restaurant owned by an old friend. We chatted and laughed, secretly embracing one another’s hearts in the way families and good friends do, and I felt the flowing of the waters of life, and the pain that has been with me so long being carried at last into the past.

As to why I went, that’s another story, and with it what happened during the meditations, and, above all, at the circle. Let me process that. More later!