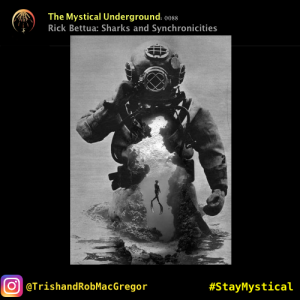 Mystical Underground: Join Trish and Rob for a conversation with Rick Bettua, who served thirty-two years as a U.S. Navy diver and has a stunning survival story to tell!

He finished his career in 2008 as a command master chief petty officer and master diver, then returned for another three-year stint as an advisor, retiring in 2011.In October 2004, he became the Navy’s command master chief of salvage diving, and in that role, he managed the world’s largest and most diverse diving command with more than 250 personnel operating throughout the Pacific and Indian Oceans as well as Iraq and Kuwait. I should add that Rick and I have co-authored a book, called BREATHE, which is about Rick’s survival story—or actually many survival stories throughout his career and afterward. After Rick retired, he moved to Queensland, Australia. He’s married and has two children.