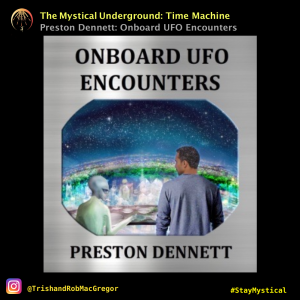 Preston Dennett began investigating UFOs and the paranormal in 1986 when he discovered that his family, friends, and co-workers were having dramatic unexplained encounters. Since then, he has interviewed hundreds of witnesses and investigated a wide variety of paranormal phenomena.
He is a field investigator for the Mutual UFO Network (MUFON), a ghost hunter, a paranormal researcher, and the author of 26 books and more than 100 articles on UFOs and the paranormal. He has appeared on numerous radio and television programs, including Midnight in the Desert with Art Bell, Coast-to-Coast, and also the History Channel’s Deep Sea UFOs and UFO Hunters. His latest book, which we are going to talk about is Onboard UFO Encounters: True Accounts of Contact with Extraterrestrials. Preston currently resides in southern California.