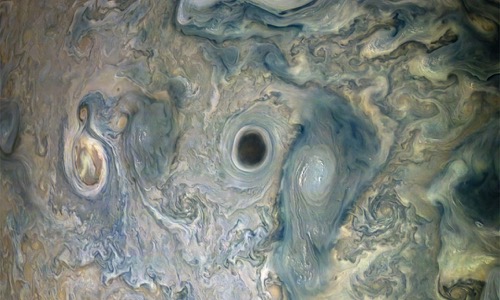 Although the planet Jupiter might be in the process of losing its famous Great Red Spot, it has recently gained a new feature that is baffling researchers, in the form of a large dark hole in its cloud tops that astronomers are calling ‘The Abyss’. Revealed during the Juno space END_OF_DOCUMENT_TOKEN_TO_BE_REPLACED

Astronomers with the European Southern Observatory (ESO) have broken new ground in exoplanet research by directly observing a planet in another solar system using a new imaging technique. This new method provided enough detail about the far-flung planet to reveal the presence of a complex, planet-wide storm—and a strange puzzle END_OF_DOCUMENT_TOKEN_TO_BE_REPLACED

A meteor exploded over the Bering Sea on December 18, 2018, at 11:48 a.m. local time, with a force equivalent to roughly 173 kilotons of TNT, roughly ten times the energy released by the bomb dropped on Hiroshima in 1945. Although there were no reported witnesses to the meteor’s dramatic END_OF_DOCUMENT_TOKEN_TO_BE_REPLACED

The European Space Agency’s (ESA) Mars Express orbiter has uncovered signs that Mars once had a vast network of waterways, including a planet-spanning ocean in its northern hemisphere, and an extensive network of rivers that carved majestic canyons through the ancient Martian landscape. Using its Mars Advanced Radar for Subsurface END_OF_DOCUMENT_TOKEN_TO_BE_REPLACED

June 18, 2021
Dreamland Podcast
A Intelligence Officer from the USS Roosevelt Speaks Out about the ‘Gimbal’ UFO Incident
June 15, 2021
New Observations
Ed Conroy and The Report on Communion: The Facts Behind the Most Controversial True Story of Our Time (Part 2)
June 11, 2021
Dreamland Podcast
The Trinity Crash: Jacques Vallee and Paola Harris Uncover an Unknown UFO Crash from 1945
June 9, 2021
The Unseen Podcast
Yvonne Smith Explores Hypnosis and Healing
June 4, 2021
Dreamland Podcast
Beyond 60 Minutes: Grant Cameron on the True Depth of Contact