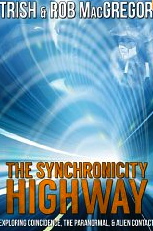 Trish and Rob MacGregor tell some fascinating stories from their new book, the Synchronicity Highway, including a startling synchronicity involving Edward Snowden, and a mind-bending prophecy of the Titanic disaster that appeared in 1898.

Did you know that 899 people who had booked passage on the Titanic refused to go because of dreams and premonitions? And why were the planes that went down on 911 nearly empty, on routes that were normally full?

This extremely unusual show also covers such mysteries as the connection between close encounters and encounters with the dead.

END_OF_DOCUMENT_TOKEN_TO_BE_REPLACED

As predicted on Unknowncountry.com’s Climate Watch last fall, this is proving to be a winter of extraordinary fury both in the United States and Europe. England is experiencing the worst flooding in 250 years, and winter records are being broken all across the United States. Meanwhile the Austral summer is entering the record books because of its extreme heat. But why? The reason lies in an unprecedented and unexpected change in atmospheric circulation that has caused dramatic strengthening of the Pacific Trade Winds at a time when they would normally be at a seasonal low.
END_OF_DOCUMENT_TOKEN_TO_BE_REPLACED

Last week, close encounter witness ‘Sandy’ described some of the most powerful and complex experiences ever recorded anywhere. But could anything like this actually happen? This week, physics expert Ralph Steiner explains just why her experiences fit current scientific theory with uncanny accuracy.
END_OF_DOCUMENT_TOKEN_TO_BE_REPLACED

Our world is soul blind, and our greatest intellectuals are not only blind to our true nature, but are in active denial. Secular humanity literally does not know who we are. But the visitors do know, and they stand willing to help anybody who is open to the possibilities that they represent.
END_OF_DOCUMENT_TOKEN_TO_BE_REPLACED