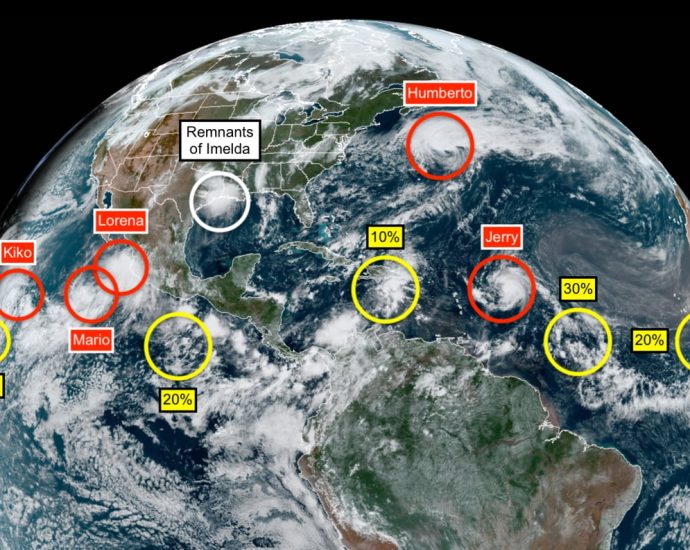 Unprecedented flooding has again struck Texas in the Houston-Beaumont region. At least 2 people have died as up to 48 inches of rain have fallen in some areas. Meanwhile, the National Hurricane Center is tracking 11 tropical storms worldwide and young people, led by Sweden’s Greta Thunberg, are protesting climate END_OF_DOCUMENT_TOKEN_TO_BE_REPLACED

Each hurricane season brings a what is known as a wave train of tropical depressions generally forming in the south Atlantic off the African coast. This season south Atlantic waters are exceptionally warm, with the result that the wave train is unusually active. Right now, Irma and Jose are active and a tropical storm behind Jose is expected to become Hurricane Lee next week.
END_OF_DOCUMENT_TOKEN_TO_BE_REPLACED

As winds in Hurricane Irma reached and exceeded 185 MPH, the storm left the island of Barbuda 90% destroyed and has caused severe destruction in the Virgin Islands. The storm is expected to strike Puerto Rico as the strongest hurricane to hit the island in a century. Florida governor Rick Scott has warned residents to evacuate the Keys and the southern part of the state. Winds are sustained at 185 MPH and are gusting to 225 MPH. Right now, the storm appears to be ready to make landfall over south Florida, but if it turns more sharply it will cross the Bahamas and make landfall in Georgia. Because of abnormally high ocean temperatures, storms could continue forming into late fall.
END_OF_DOCUMENT_TOKEN_TO_BE_REPLACED