The Woman Beside the Man

New Observations has the privilege of presenting an interview with Paula Looking Horse, wife of Chief Arvol Looking Horse and partner in the work of bringing the White Buffalo Calf Woman teachings to the world.  Paula and Chief Arvol joined us in Wasta for our conference and shared their profound wisdom with the group.  We were truly blessed to have them in attendance. 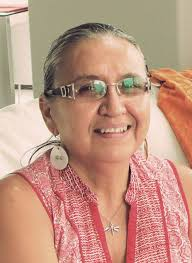 Paula Looking Horse is an accomplished traditional Dakota singer and artist. Her musical credits include opening for the Indigo Girls, touring Europe with Keith Secola and other notable native artists, and composing and producing her own CD, Songs of a Black Hills Woman. She has been involved in Native rights for over 40 years, during which time she organized the “Wopida” (Great Thank You) Ceremony in 1984 for the Sacred Pipestone Quarries in Minnesota.  The following 7 years she helped organize the Sacred Pipestone Run through all SD Reservations  to bring attention to the mass exploitation of the selling of the sacred stone aka “the blood of the people”.
She is one of the four graduates of Red Schoolhouse (RSH) in Minnesota and a subsequent board member. RSH was the first alternative school to teach Traditional Native education curriculum – bringing forth historical truth vs. inaccurate history books in Public Schools. She brought her organizational skills to World Peace and Prayer/ Honor Sacred Sites Day in 1996 and has been a moving force in creating the events ever since. She is also the mother of eight children and many more adopted throughout her life.