Ed Conroy and The Report on Communion: The Facts Behind the Most Controversial True Story of Our Time (Part 1)

Home  »  New Observations   »   Ed Conroy and The Report on Communion: The Facts Behind the Most Controversial True Story of Our Time (Part 1) 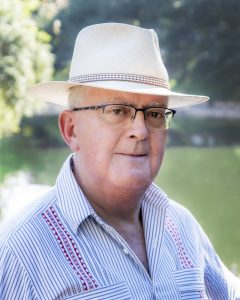 Ed Conroy joins us in this fascinating discussion on his book of investigative journalism: Report on Communion.  New Observations and Ed discuss how he came to research and interview numerous subjects on Whitley Strieber’s life and ET experiences as well as Ed’s own first-hand account of spending time at the Strieber cabin in the woods of New York State.
Ed will be joining us for Part 2 of this interview where we delve into his own spiritual journey and interest in the magical order of The Golden Dawn.  The second will be posted in late May.

Ed Conroy is the author of “Report on ‘Communion,'” (Morrow, 1989; Avon, 1990), the result of his year-long investigation into the life, literary work and extraordinary experiences of Whitley Strieber.  A fourth-generation native of San Antonio, he is a former arts and culture reporter and urban affairs columnist for the San Antonio Express-News. Educated at California Institute of the Arts– where he began his lifelong study of Chinese martial arts–as well as the Universidad Nacional Autonoma de Mexico and the University of Texas at San Antonio, he is a fully bilingual and bicultural witness to the unique cultural and political currents of the US-Mexico borderlands.

He has written, in Spanish, on the UFO phenomenon and crop circle phenomena for Mas Alla de la Ciencia of Barcelona, Spain.  For the past 23 years he has served as Director of Development for Southwest School of Art in San Antonio.  He is the proud father of Brigid Irene Conroy, recent graduate of Harvard Divinity School.  He is at work on an historical novel set in San Antonio, Chihuahua, and Mexico City during the years of the Mexican Revolution.  For the past three decades he has been a student of the Builders of the Adytum (www.bota.org).

Ed be happy to respond to correspondence at this email address: econroy53@gmail.com

Subscribers, to watch the subscriber version of the video, first log in then click on Dreamland Subscriber-Only Video Podcast link.
2021-04-05
Previous New Observations Post: Our Exopolitical Future: A Conversation with Alfred Lambremont Webre
Next New Observations Post: A Hero’s Journey Through the Bardo: My Personal Story of Healing