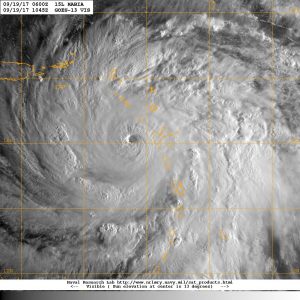 Tropical Storm Barry escalated into a Category 1 hurricane when it made landfall on Saturday, and is expected to pour up to 20 inches of rain on eastern Louisiana, accompanied by a storm surge of several feet along the coastline from the mouth of the Pearl River to Morgan City. A state of emergency has been declared by Louisiana Governor John Bel Edwards: “The entire coast of Louisiana is at play in this storm,” a potentially dangerous storm with an unusual origin.

New Orleans, situated at the mouth of the Mississippi River, is already inundated by flooding after lines of thunderstorms linked to the same low pressure system that Barry was formed from dumped 7 inches of rain on The Big Easy, with some areas under 3 to 4 feet of water. City officials are concerned that rising water from the Mississippi could reach the top of the city’s levees, with the expected 20-foot rise in river levels coming close to the height of the shorter 20-foot levees.

Although the North Atlantic Hurricane Season typically starts to ramp up in late July, only ten appear to have formed in the Gulf of Mexico in the July 1-10 period since record keeping on the phenomenon began in 1851. Barry is also unusual in that the low pressure system, called a mesoscale convective vortex (MCV), that the now-tropical storm formed from originated over the U.S. Plains last week, producing a series of thunderstorms as it made its way southeast across the country.

When this MCV reached Tennessee on July 6, it was flagged by the National Hurricane Center for potential development into a tropical system–a rarity for a storm system that originated near the center of the continent; typically, tropical storms, especially ones that beget hurricanes, originate from low pressure systems that form over the ocean. When this system crossed the Florida Panhandle on July 9 it began to feed off of the warm waters of the Gulf of Mexico, strengthening enough to become the second named storm of the 2019 Atlantic hurricane season.

Between the wet ground conditions caused by extensive flooding in the Great Plains this spring and abnormally-warm surface water in the Gulf of Mexico, tropical storm/hurricane Barry appears to be yet another storm affected by global warming, although there has been no official word on that as of yet. And whether Barry strengthens into a hurricane or not, July storms are typically unremarkable in terms of wind speed, but are more notorious for their storm surges and copious amounts of rainfall, and with nearly two feet of rain in the forecast, to-be Hurricane Barry is expected to be no exception.
Image Credits:
News Source:
Dreamland Video podcast
To watch the FREE video version on YouTube, click here.

Subscribers, to watch the subscriber version of the video, first log in then click on Dreamland Subscriber-Only Video Podcast link.
2019-07-11
Previous Headline News Post: The US’s Largest Wildfire is Currently in Alaska, Fueled by Record-Breaking Temperatures
Next Headline News Post: Increasingly Unstable Antarctic Glaciers may be Reaching their Point of No Return