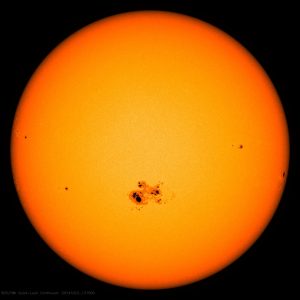 A sunspot on the far side of the Sun has been discovered to be so large that “it is affecting the way the sun vibrates,” according to Spaceweather.com. The same region also produced a major coronal mass ejection and radiation storm on September 5; luckily for us the eruption is headed away from Earth, and is instead traveling in the direction of Venus.

The sunspot in question, assumed to be AR3088, was first spotted when the side of the Sun it resides on was visible from Earth in August, when it produced numerous M-class solar flares. Although AR3088 is the best candidate for the recent CME this has yet to be confirmed, as observations from satellites that track the far side of the Sun’s surface are incomplete.

Sunspots are regions on the Sun’s surface caused by localized disturbances in the star’s magnetic field that prevents hot plasma from circulating properly across the Sun’s surface; sometimes, the field lines of these magnetic disturbances bunch up and “break”, resulting in a solar flare, occasionally accompanied by a coronal mass ejection (CME), sending a storm of charged particles out into space.

The CME that occurred on September 5, described as a “a magnificent full-halo CME” on Spaceweather.com, was recorded by NASA’s STEREO-A spacecraft, one of the two Solar Terrestrial Relations Observatory spacecraft that travel in the same orbit as the Earth, but are on opposite sides of the Sun from one-another. Since the ejection occurred on the Sun’s far side the charged particles are headed away from Earth, and instead are streaming toward Venus.

The CME was recorded by the Solar Orbiter spacecraft, a solar observatory developed by the European Space Agency that is designed to make close passes to the Sun’s surface, with the storm’s energy registering as “at least an order of magnitude stronger than the radiation storm” that struck Venus last week, according to the project’s principal investigator, George Ho of the Johns Hopkins Applied Physics Lab.

“I can safely say the Sept. 5th event is one of the largest (if not THE largest) Solar Energetic Particle (SEP) storms that we have seen so far since Solar Orbiter launched in 2020,” according to Ho. “It is at least an order of magnitude stronger than the radiation storm from last week’s CME.”

“In fact, the >10 MeV and >50 MeV particle intensity has not subsided since the beginning of the [storm] yesterday,” Ho continues. “This is indicative of a very fast and powerful interplanetary shock, and the inner heliosphere may be filled with these high-energy particles for a long time. I think I’ve only seen [a] couple of these in the last couple solar cycles.”

Despite predictions that this cycle would mark another mild season, solar cycle 25 is proving to be extremely active, having produced numerous X-class flares since the cycle started in late 2019.

Although these recent solar storms weren’t directed at Earth, we mightn’t always be that lucky: learn about the danger presented by these solar eruptions—and what needs to be done to weather them—in Whitley’s 2012 ebook Solar Flares: What You Need to Know.

Subscribers, to watch the subscriber version of the video, first log in then click on Dreamland Subscriber-Only Video Podcast link.
2022-09-07
Previous Headline News Post: MONDAY NIGHT-TRAVEL CHANNEL: Whitley and his Cabin Experiences are Featured in a New Documentary
Next Headline News Post: Your Doppelganger Might Have More in Common With You Than You Think