The Pentagon May Have Collected Biological Samples From Close Encounter Witnesses 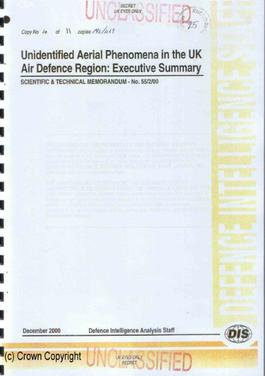 The Pentagon’s Advanced Aerospace Threat Identification Program (AATIP) may have collected biological samples from close encounter witnesses, according to UFO investigator Nick Pope, as part of one of the program’s studies that involved the effects of energy fields on living organisms. The study reportedly involved an investigation into injuries inflicted on witnesses during a UFO encounter in Brazil in the late 1970s, and at least one of the witnesses involved in the Rendlesham Forest incident.

In an interview with the U.K.’s Metro, Pope referred to a quote made by Dr. Hal Puthoff during a 2018 presentation in Las Vegas: “We, as part of this program looked at some cases that were really good from Brazil. In 1977, 78, it was like Close Encounters of the Third Kind, a thousand pages of documents all done by the Brazilian Air Force investigative team, 500 photographs, 15 hours of motion film, a lot of medical injuries when people encountered these craft at close range.”

According to Pope, this statement is “confirmation that the Pentagon’s AATIP program looked not only at UFOs but also at close encounters and alien abductions,” and may have been detailed in a still-unreleased report included in a list of AATIP research endeavors titled “Field Effects on Biological Tissues”, authored by Dr. Kit Green of Wayne State University.

“I can’t prove it, but from sources close to this I’m almost certain that part of this work involved getting blood and DNA samples from close encounter witnesses – including at least one and maybe two witnesses to the UK’s infamous Rendlesham Forest incident,” Pope continued.

“I believe this was done in a way that disguised the fact that this was for a US intelligence program, with witnesses being told that they were participating in a scientific or academic study.

“There are clearly extreme sensitivities about human experimentation, and all this is – or should be – tightly regulated after the scandal that followed the CIA’s infamous MK-Ultra mind control experiments. I’m sure the rules were followed, but if AATIP did acquire blood and DNA samples from close encounter witnesses then I’m sure Congress will want to know how this was done and what was concluded. Hopefully this is one aspect of the ongoing Congressional interest in AATIP and in the phenomenon more generally.

“Physical effects on UFO witnesses was one aspect of the MoD intelligence assessment of the phenomenon known as Project Condign, but officially titled Unidentified Aerial Phenomena in the UK Air Defence Region. I helped set up this study but had been posted to another MoD division by the time the assessment was completed”.

Project Condign was an investigation into the UFO phenomenon conducted by the British Government’s Defence Intelligence Staff (DIS) in the late 1990s that included an evaluation of biological effects that UFOs might have on witnesses to the phenomenon. The report concluded that energy fields produced by ball lightning-like “buoyant plasma formations” and other plasma phenomena are hypothesized to be able to induce perceptual alterations or hallucinations in close encounter witnesses.

“One sentence in the final report read ‘The well-reported Rendlesham Forest/Bentwaters event is an example where it might be postulated that several observers were probably exposed to UAP [Unidentified Aerial Phenomenon] radiation for longer than normal UAP sighting periods’,” Pope said. “If we can’t study the UFOs themselves, then studying the effects they have is the next best thing.

“Obviously, that’s got to include taking a very close look at people who claim to have had close encounters, and perhaps even people who say they’ve been abducted by aliens. I told one such individual to give his blood and DNA to a scientist if he wanted, but to be aware that the ultimate ‘customer’ was probably the government. I even joked that if he didn’t want to give his DNA, he should be very careful about accepting a coffee and then leaving the cup behind!”