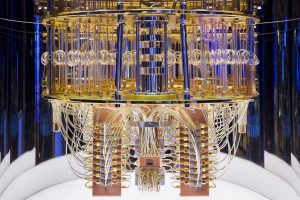 Another milestone has been reached in the realm of quantum computing, with a Canadian company reporting that they have run a complex benchmarking problem through their new equipment that produced a solution that would have taken a conventional supercomputer 9,000 years to complete in a mere 36 millionths of a second.

The quantum processor in question, appropriately named Borealis, was built by Toronto’s Xanadu Quantum Technologies, a company that produces hardware and software for photonic quantum computers that can be accessed via cloud computing. Google first claimed quantum supremacy over classical supercomputers in 2019, when a NASA-owned 54-qubit quantum computer called Sycamore solved a problem in just three minutes and 20 seconds that would have taken IBM’s Summit supercomputer 10,000 years to complete.

Classical computers measure their data in binary digits—better known as “bits”—that are physically represented by the microscopic switches on a computer chip: the switch is either on or off, signaling a one or zero in computer code. Quantum computers rely instead on quantum bits, more typically referred to as “qubits”, that can not only be in a state of either on or off, but due to the effect of quantum superposition can also be simultaneously on AND off, theoretically allowing individual qubits to operate much faster and more efficiently than their classical counterparts.

Quantum computers also have the advantage of being able to compute the probability of each solution before applying it to the overall equation, saving a significant amount of processing time, whereas conventional computers are forced to run through each individual solution to evaluate whether it is valid or not. Additionally, the qubits in some processors can be quantumly entangled, allowing the individual switches to directly communicate with one-another.

To illustrate how much more powerful that simple inclusion of having both on-and-off states available to an individual qubit at the same time, the microprocessors that power our everyday laptops, mobile devices and desktop computers contain hundreds of millions (or even billions in high-end units) of bits that enable them to do what they do; quantum computers, on the other hand, operate using merely dozens of qubits, with more advanced models boasting only hundreds of switches. Borealis itself employs up to 288 “squeezed-state” qubits—a quantum state that can allow more than one photon to occupy each qubit at a time, although the benchmarking task put to the machine used no more than 219 of the machine’s qubits at any point during the experiment.

The benchmarking problem Borealis was tasked with is a complex one called Gaussian Boson Sampling (GBS): this is a quantum computation that calculates the probable distribution of photons (the boson part of the equation) after being scattered by an interferometer, a complex task that is effectively beyond the capabilities of traditional semiconductor computers, but one that quantum computers are well suited for.

Xanadu estimates that completing the GBS task put to their quantum computer “would take more than 9,000 years for the best available algorithms and supercomputers to produce, using exact methods,” according to their study paper’s text, to successfully run just once; Borealis, however, “requires only 36 μs” to complete the same task, a “runtime advantage [that] is over 50 million times” beyond what has been reported from other quantum computers.

“This work is a critical milestone on the path to a practical quantum computer, validating key technological features of photonics as a platform for this goal,” according to Xanadu’s study paper.