The 2010s Were the Hottest Decade on Record 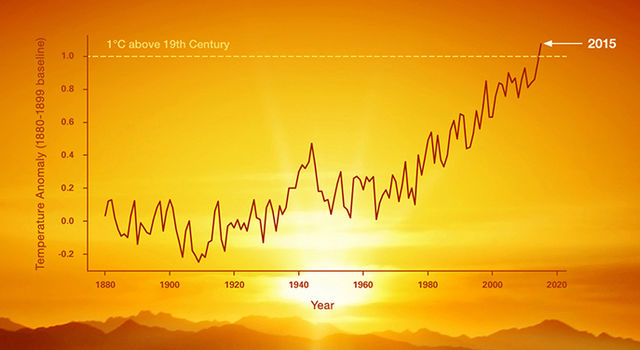 2019 is now officially the second warmest year on record, according to a joint press release from NASA and NOAA, with 2016 still holding the dubious distinction of being at the top of the global warming thermometer. Unfortunately, because the planet has seen consistent year-over-year temperature increases, the 2010s are now the hottest decade on record, with the last half decade making up the five hottest years recorded.

“The decade that just ended is clearly the warmest decade on record,” said Gavin Schmidt, the Director of NASA’s Goddard Institute for Space Studies (GISS). “Every decade since the 1960s clearly has been warmer than the one before.”

“We crossed over into more than 2 degrees Fahrenheit warming territory in 2015 and we are unlikely to go back,” according to Schmidt. “This shows that what’s happening is persistent, not a fluke due to some weather phenomenon: we know that the long-term trends are being driven by the increasing levels of greenhouse gases in the atmosphere.”

Although both NASA and NOAA conducted their analyses independent of one-another, their findings closely coincided, along with the numbers released by the Berkeley Earth research group, the UK’s Met Office Hadley Centre, and the Cowtan and Way analysis.

This continued warming has resulted in a multitude of extreme weather events throughout the year, including (but far from limited to) intense heat waves, extreme precipitation events, and record-breaking floods and wildfires.

The extent of Arctic sea ice in September tied with 2007 and 2016 for the second lowest in the satellite record (2012 is still the record-holder), followed by a slow autumn freeze, according to the National Snow & Ice Data Center. Overall, the 2010s saw consistently low Arctic sea ice extent compared to long-term averages. Although 2019 was only the 34th warmest year for the contiguous 48 United States, earning the year a “warmer than average” classification, the Arctic has warmed three times faster than the rest of the planet.

Subscribers, to watch the subscriber version of the video, first log in then click on Dreamland Subscriber-Only Video Podcast link.
2020-01-17
Previous Headline News Post: Winter Is Coming—At Least for Artificial Intelligence
Next Headline News Post: Release of UFO Documents Would Compromise Us National Security, According to US Navy