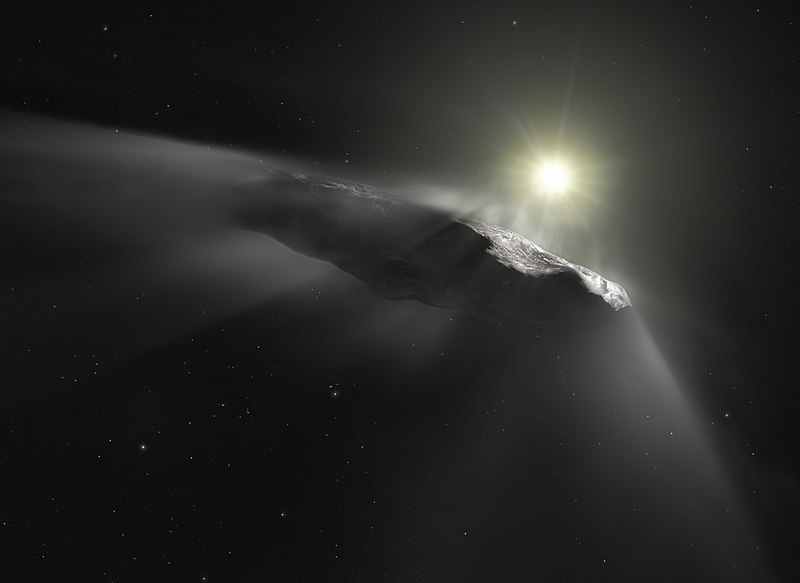 Astrophysicists are back to square one in trying to attach a conventional explanation to the oddity presented by ʻOumuamua, the first known interstellar object to pass through the Solar System. While making its close pass to the Sun, ʻOumuamua sped up ever so slightly, prompting at least one prominent researcher to speculate whether or not the interstellar interloper was an artificial structure, such as a light-sail, which could account for the unexpected acceleration–and so far, this idea appears to be the only one that fits the facts.

One theory that was put forward to explain this acceleration was a possible off-gassing event, a phenomenon seen in some comets as they’re heated by their close proximity to the Sun. An event such as this would, however, produce a visible tail of gases streaming away from the object, and ʻOumuamua showed no signs of emitting such a feature.

But if ʻOumuamua was an object made out of frozen hydrogen, such a tail would be invisible from Earth, regardless of how much gas is ejected from its surface. Although only a hypothetical phenomenon, these “hydrogen icebergs” are thought to form in giant molecular clouds that form in deep space and are composed primarily from molecular hydrogen. Far from the heat of any stars, the sub-frigid temperatures these objects are thought to form in dip as low as 14.1 Kelvin—just above absolute zero—or -259.14°C (-434.45°F).

This theory was put forward by astrophysicists Darryl Seligman, with the University of Chicago, and Yale’s Gregory Laughlin, as the reason behind ʻOumuamua’s strange behavior: although other gases such as neon were explored, a solid block of hydrogen fit the observations made during ʻOumuamua’s close pass with the Sun, with the warming gas acting like a slow-moving—yet essentially invisible—rocket engine, speeding the interstellar visitor up ever so slightly.

But this theory was deflated when one of the researchers that first put forward the idea that ʻOumuamua was an artificial craft pointed out that it is impossible for hydrogen icebergs to exist, at least in our neck of the woods. Astrophysicist and chair of Harvard’s Astronomy Department, Avi Loeb, along with Korea Astronomy and Space Science Institute astrophysicist Thiem Hoang, published a paper pointing out that such structures would evaporate long before they could reach our solar system, cooked by the warmth of distant starlight.

Comets are famously composed of dirt and water ice, allowing them to form in the comparatively warm environs of the outer reaches of the solar system, with the ice clumping onto other blobs of ice that eventually built up over billions of years into the comets we see today. Molecular hydrogen, however, melts at 13.99 Kelvin (−259.16°C, or −434.49°F), meaning that outside of the environs of the giant molecular clouds that hydrogen icebergs are thought to form in, any clumps of frozen hydrogen would have trouble sticking to one-another (think of how slippery an ice cube gets when its surface starts to melt), preventing the gas from forming a structure as large as ʻOumuamua’s 230-meter (755-foot) oblong shape.

Loeb and Hoang also point out that even if hydrogen icebergs of that size were capable of forming, the warmth of distant starlight (if one could consider something 1/30 billionth the heat of the Sun as “warm”) would evaporate the ‘berg long before it could complete the hundreds of millions of years-long journey required to travel between the closest giant molecular cloud and our Solar System.

And Seligman agrees with Loeb and Huang’s reasoning: “Hydrogen icebergs don’t live that long in the galaxy,” and they “definitely don’t have time to get all the way from [the nearest] giant molecular cloud.”

The hydrogen iceberg theory only works if ʻOumuamua is less than 40 million years old, meaning that if the object is that young then it would have to have formed from a source very close to the Solar System, but at a distance of 17,000 light years W51 is one of the closest giant molecular clouds, making for a 200 million-year journey, even at ʻOumuamua’s brisk 95,000 km/h (58,900 mph) clip.

While this probably rules out the idea that ʻOumuamua is actually a secret comet with an invisible tail, it doesn’t quite prove that the obscure object was actually a derelict extraterrestrial vehicle. However, in the absence of any other practical theories, Loeb’s idea that our strange visitor was an artifact from a distant civilization is still on the table.

Subscribers, to watch the subscriber version of the video, first log in then click on Dreamland Subscriber-Only Video Podcast link.
2020-09-04
Previous Headline News Post: A Rash of “Absolutely Barbaric” Horse Mutilations Have France’s Equine Community on Edge
Next Headline News Post: The Study Results for Russia’s Controversial Sputnik V Vaccine Have Been Released