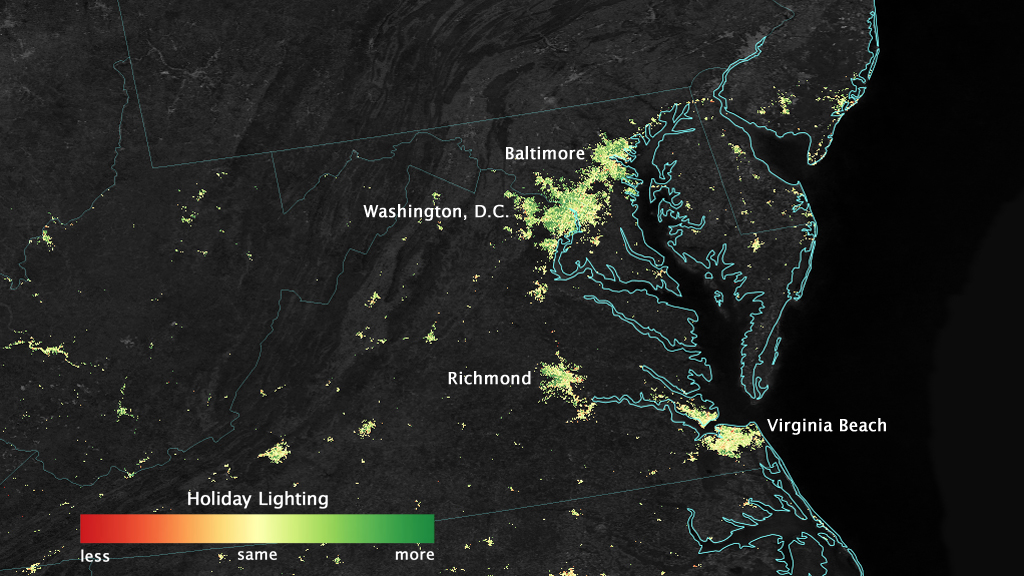 Throughout the centuries that Santa Claus has been conducting his annual round-the-world aeronautical adventure, cities have grown and the technology to light them has improved, resulting in a marked increase in the brightness emitted from our collective communities. But what would that view from far above look like to a long-lived entity such as our favorite altruistic elf? A study undertaken in 2014 suggests that from the airborne sleigh Ol’ Saint Nick probably sees modern humanity at its most radiant.

This survey was conducted using data gathered by the NOAA/NASA Suomi National Polar-orbiting Partnership (Suomi NPP) satellite, specifically images from the satellite’s Visible Infrared Imaging Radiometer Suite (VIIRS), to analyze the light emitted from 70 cities in the U.S. in 2012 and 2013. Using an algorithm that filters out moonlight, clouds, and airborne particles in order to isolate the lights from these cities, the researchers found that lights started getting brighter on the day after Thanksgiving—better known as Black Friday—continuing through New Year’s Day.

The increase in luminosity was substantial: urban areas brightened between 20 and 30 percent over the holiday season; in suburbs and the outskirts of cities the effect was even more pronounced, with light levels increasing between 30 and 50 percent. Because of how snow on the ground reflects light the analysis was conducted mostly on communities in the southern U.S., including Puerto Rico, home to vibrant nighttime celebrations over the holiday period.

Regarding the difference in light increased observed between urban and suburban communities, “we see less light increases in the dense urban centers, compared to the suburbs and small towns where you have more yard space and single-family homes,” according to Eleanor Stokes, a NASA Jenkins Graduate Fellow and Ph.D. candidate at Yale University’s School of Forestry and Environmental Studies.

Christmas and Hanukkah don’t have a monopoly on illuminating the holidays, so the analysis was extended to cities in the Middle East during Ramadan, where in many countries stringing up lights in public is a tradition during the holy month. Although cities in Turkey, Syria, Iraq and Lebanon didn’t see an appreciable increase in luminosity, Saudi Arabian cities such as Riyadh and Jeddah brightened by about 60 to 100 percent throughout the holiday.

From your family at Unknown Country, may this holiday season bring some inner and interstellar light to living beings everywhere.