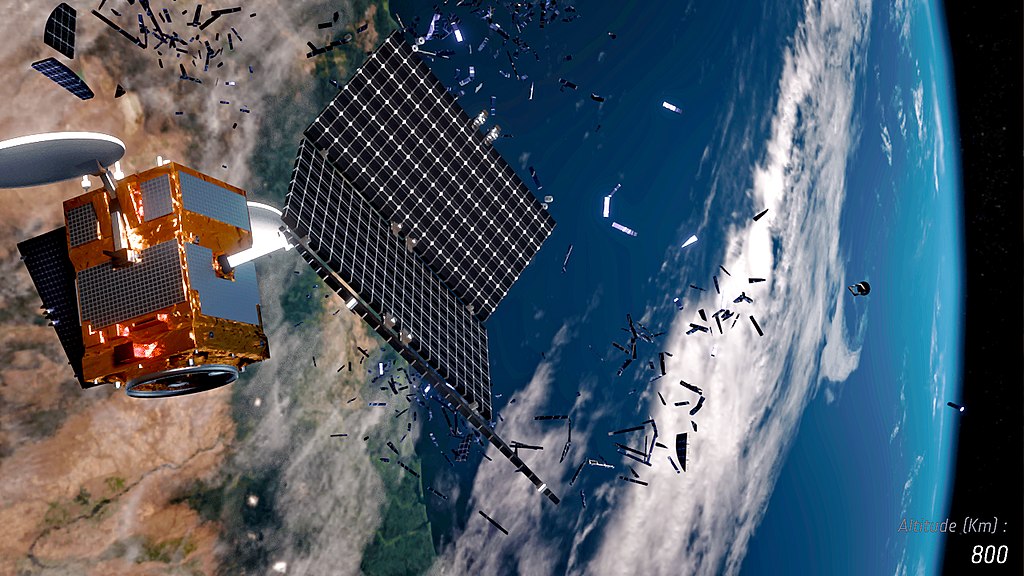 Russia recently destroyed a defunct intelligence satellite, on November 15, 2021– with an anti-satellite missile.  This created a debris cloud that encroached on the International Space Station, an alert that prompted its seven crew members to prepare for a potential impact. Although the scenario closely resembles the setup for the 2013 sci-fi thriller Gravity, there is no indication that any real-world debris has struck the ISS.  The debris cloud, however, made up of more than 1,500 pieces of very large debris, continues to circle the Earth– raising an alarm call for the need for strong international policies regarding actions (particularly those involving weapons of mass destruction) that may introduce more space debris into an already-crowded sky.

The weapon used in this instance was an A-235 PL-19 Nudol anti-satellite missile launched from Plesetsk Cosmodrome at 02:45 UTC.  Five minutes later, it struck Kosmos 1408, a Soviet-era electronic signals intelligence (ELINT) satellite launched in 1982. This impact generated a debris cloud of approximately 1,500 objects large enough to be tracked along with presumably hundreds of thousands of objects of smaller size, that orbits our planet, Earth, once every 93 minutes.

Kosmos 1408’s already-decaying orbit came as close as 43 kilometers (26.7 miles) to that of the lower-orbiting ISS, meaning that objects from the still-expanding debris cloud posed a potential collision threat with the space station. In response to the alert issued by the US State Department, the crew donned their spacesuits and took shelter in the station’s return capsules, in case they had to make an emergency departure from the ISS.

The deliberate destruction of Kosmos 1408, described as “dangerous, reckless, and irresponsible” by US State Department spokesperson Ned Price, has received widespread condemnation from numerous agencies, including NASA Administrator Bill Nelson.

“I’m outraged by this irresponsible and destabilizing action,” Nelson said in a statement. “With its long and storied history in human spaceflight, it is unthinkable that Russia would endanger not only the American and international partner astronauts on the ISS, but also their own cosmonauts.” The seven-person crew aboard the ISS includes two cosmonauts, flight engineer Pyotr Dubrov and the ISS’s current commander, Anton Shkaplerov.

“Their actions are reckless and dangerous, threatening as well the Chinese space station and the taikonauts on board,” added Nelson.

Although the ISS and her crew now appear to be safe, the debris field created by the event is expected to present a hazard to satellites for decades to come. Compared to other anti-satellite weapons tests, including China’s shoot-down of their Fengyun 1C satellite in 2007 and India’s 2019 Mission Shakti, the destruction of Kosmos 1408 appears to have created fewer, yet larger pieces of debris, meaning that many of the individual chunks will have enough mass to keep them in orbit longer than their smaller counterparts.

A simulation of the spread of the Kosmos 1408 debris cloud was posted in a tweet posted by the EU Space Surveillance and Tracking Programme.