New High-Temperature Records have been Broken in Alaska 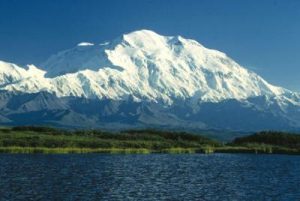 Despite the presence of unseasonably low temperatures seen across the country over the course of March, Alaska has been hit with record-high temperatures, with 55 temperature records across the state being either met or broken, and at least one town marking the earliest 70-degree reading on record for the northern state—a temperature many cities further south were still waiting to reach.

Although the average temperature around the globe is steadily increasing, the Earth’s polar regions are warming twice as fast as the rest of the planet due to what is known as the polar amplification effect, and these changes are already being felt. A new United Nations report also says that even if the goals of the Paris climate agreement are met, temperatures in the Arctic are unavoidably “locked in” to increase by 5.5°F to 9°F (3°C to 5°C) by 2050.

Anchorage hit 50°F (10°C) on March 30, the 18th straight day of temperatures above 40 degrees (4.4°C) for Alaska’s largest city; Anchorage also had no measurable snowfall for the entire month of March, only the second time this has occurred since record-keeping began. In the southeast corner of the Alaska, the town of Klawock recorded a temperature of 70°F (21.1°C) on March 19, the earliest date that the 70-degree mark has ever been hit for the entire state.

Further east and well above the Arctic Circle, the Canadian town of Inuvik saw an average daily high of 24.8°F (-4°C) throughout the month of March. This mightn’t seem like much of a high temperature at first, until one realizes that the average high for the town in the month of March is typically only 1.76°F (-16.8°C)—23°F (16.8°C) above normal! One day even saw a high of 47.7°F (8.7°C), at a time of the year when the temperature is supposed to be closer to 0°F (-32°C). This monthly trend appears to have set a new record for the largest temperature deviation, at least for a town in Canada.