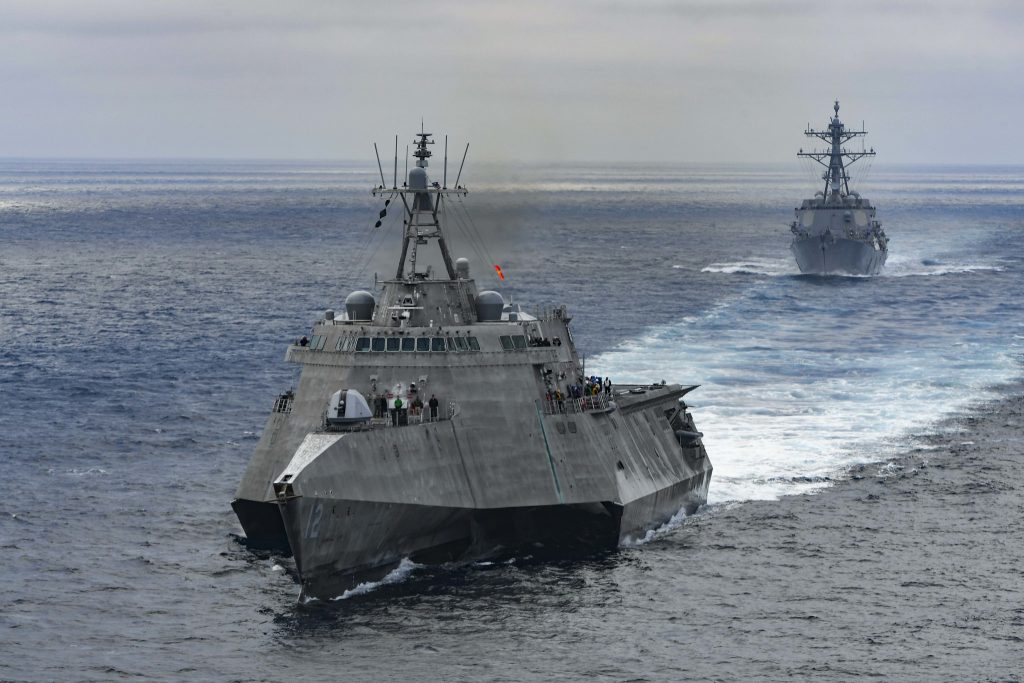 A video of a UFO that was encountered by the USS Omaha off of the California coast in 2019 has been released by documentary filmmaker Jeremy Corbell. A series of three still images of this video had been released previously as part of a classified Office of Naval Intelligence (ONI) briefing, that described the spherical object as entering the water near the ship, a moment the video captures, along with the surprise of the crew tracking the mysterious interloper.

According to Corbell, this 60-second video clip was filmed in the Combat Information Center of the USS Omaha (LCS-12) on July 15, 2019, and is remarkable in that it captures the moment the object appears to enter the water. The released video itself is a recording of a display showing a live “black-hot” infrared image (where heat sources appear darker than cooler backgrounds) of a six-foot wide spherical object traveling low over the water near the ship.

As the recording is being made as the incident is unfolding, it also captured the background chatter made by the CIC crew, including both official communications and offhand comments made by the crew. The object they were tracking was operating in “31 knots sustained wind” with “gusts of 40” knots (57 to 74 km/h, or 36 to 46 mph), causing “a lot of white water out there, some six-foot swells” as the object slowed and descended towards the surface of the ocean.

At 56 seconds into the video, the object disappears as it appears to touch the surface of the ocean, with the crew announcing that it had “splashed”, meaning that it appeared to have entered the water. The order to “mark bearing and range” was made to track the location of the impact site; the Omaha subsequently made a thorough search of the area where the sphere had disappeared for potential wreckage, reportedly aided by a submersible, but their efforts were “ineffective”, according to a classified Office of Naval Intelligence (ONI) briefing.

The USS Omaha wasn’t alone in being buzzed by UAPs when it encountered the strange object, with at least four other USN destroyers in the area involved in a series of incidents that occurred over the nights of July 14, 15, 25 and 30. Additional video footage of these incidents has been verified by the Navy, including footage from the USS Russell of triangular objects that were “hovering approximately 700 ft over RLS’s [USS Russell’s] fantail,” according to the previously mentioned ONI briefing.

According to Corbell, the object that appears in the video was just one of as many as fourteen craft that surrounded the Omaha over a three-day series of encounters. As a newly-commissioned Independence-class littoral combat ship, the USS Omaha has an impressive array of state-of-the-art sensors, but was still unable to track the objects as they arrived and departed the vicinity.

The Office of the Inspector General for the Department of Defense announced on May 3 that it is conducting an evaluation regarding how the DoD has handled the subject of UFOs in the past, in an effort to answer the question of how the subject of UAPs managed to “fall through the cracks for years,” according to former Deputy Assistant Secretary of Defense for Intelligence Christopher Mellon.

Additionally, an unclassified report on what the various branches of government knows about the UFO phenomenon is due to be delivered by the Director of National Intelligence to the House Armed Services and Intelligence Committees in early June.

Referring to the recently-released video footage, Corbell stated that “this is part of a much larger series of events that we’re going to be learning about.”