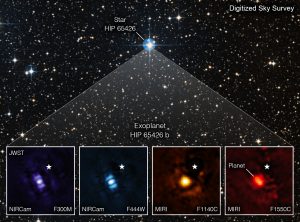 The James Webb Space Telescope has taken its first direct image of a planet in a distant star system nearly 400 light years away, producing an image with a clarity that exceeds JWST’s designers’ expectations by about ten times.

HIP 65426 b is a Jupiter-sized gas planet 385 light years away in the constellation Centaurus. This world is peculiar in that although it is extremely young—estimated to be only 14 million years old—it lacks a debris disk, something that our current models for planetary evolution says it must have; and at a distance of 92 astronomical units HIP 65426 b is roughly twice as far out from its parent star than the average distance Pluto is from the Sun.

Although 20 different exoplanets have been imaged by Earth-based telescopes to date, HIP 65426 b being one of them, the instruments used to produce those images have been hampered by the Earth’s atmosphere blocking large segments of the infrared spectrum, limiting the amount of detail that can be collected from those far-flung worlds. However, at 1.5 million kilometers (932,057 miles) away from any distortion-causing atmosphere, JWST can take snapshots of distant objects in unprecedented detail, with a performance ten times better than originally anticipated.

HIP 65426 b’s relative youth also makes it hot, meaning it appears very bright to JWST’s sensitive infrared sensors, allowing the spacecraft to glean an unprecedented amount of detail from the distant planet, including changes in brightness across its surface that might indicate the presence of clouds and weather.

The level of detail being returned by JWST means that the new observatory should be able to image planets with masses as low as Uranus, or the equivalent of 14.5 Earths.  “It’s going to allow us to get down to planets that are analogues of ice giants in our own solar system,” exclaims Sasha Hinkley, a professor of astrophysics at the University of Exeter. “These might be things like Saturns, or possibly even Neptunes if we’re lucky.”

Because of its close proximity to Earth, JWST just might also be able to image even smaller planets that might orbit Alpha Centauri that are just five times the size of the Earth; at 7 times the Earth’s mass, Proxima Centauri c is either a super-Earth or mini-Neptune, and may prove to be a good imaging target for the James Webb Space Telescope.

Subscribers, to watch the subscriber version of the video, first log in then click on Dreamland Subscriber-Only Video Podcast link.
2022-09-13
Previous Headline News Post: Your Doppelganger Might Have More in Common With You Than You Think
Next Headline News Post: A Philosophy of Science Professor Asks: Are Plants Conscious?