It Turns Out That Contrails are Bad for Global Warming Too 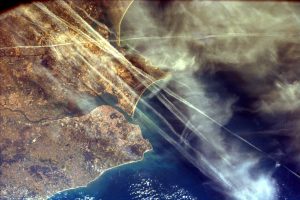 One might assume that anything that might reflect sunlight back into space, like bright aircraft contrails, would be good for decreasing the effects of global warming, but a new study predicts that the atmospheric heat trapped by the water vapor in the ‘trails will triple by the middle of the century, having already outstripped the warming effect from the combined carbon emissions from all aircraft throughout history.

A 2011 study conducted by the German Aerospace Centre found that the heat-trapping potential of aircraft contrails, called “contrail cirrus” by the researchers, is itself about ten percent greater than the carbon dioxide released in an aircraft’s exhaust. Although aircraft exhaust accounts for only around five percent of global carbon emissions, any new factors contributing to the atmosphere’s heat retention—especially if it more than doubles the effect—should be taken seriously.

This new study, also conducted at the German Aerospace Centre, now predicts that the radiative forcing effects of contrails will triple from their 2006 levels by 2050, due to an expected quadrupling in the volume of air traffic by that year, as well as a slight shift by air traffic towards higher altitudes.

“Lots of people talk about the need to stop air traffic increasing all the time, but this [contrail cirrus] is not taken that seriously,” according to study author Ulrike Burkhardt, from the German Aerospace Centre. “That’s a problem if the non-CO2 effects are larger than the CO2 ones.”

While water vapor itself has more than double the potency of CO2 as a greenhouse gas (roughly 2.34 times), it is also extremely short-lived, lasting in the atmosphere for only a matter of days before falling back to the surface as rain; CO2, on the other hand, can float around in the atmosphere for centuries. Additionally, instead of being a factor that controls atmospheric temperature as CO2 is, water vapor is controlled by temperature, as warmer air holds more moisture.

Additionally, the location of an individual cloud will determine its net effect on global warming: clouds in the lower atmosphere tend to promote a cooling effect, due to their thick, relective nature; conversely, clouds high in the atmosphere, including high-altitude contrails, tend to be less dense and reflect less sunlight, so they absorb more radiation and contribute to a warming effect.

Subscribers, to watch the subscriber version of the video, first log in then click on Dreamland Subscriber-Only Video Podcast link.
2019-08-14
Previous Headline News Post: A Large Object Has Impacted Jupiter, and its Great Red Spot May Be Safe—For Now
Next Headline News Post: Martian Methane Is Not Ancient Gas Being Released from Rocks, according to Researchers