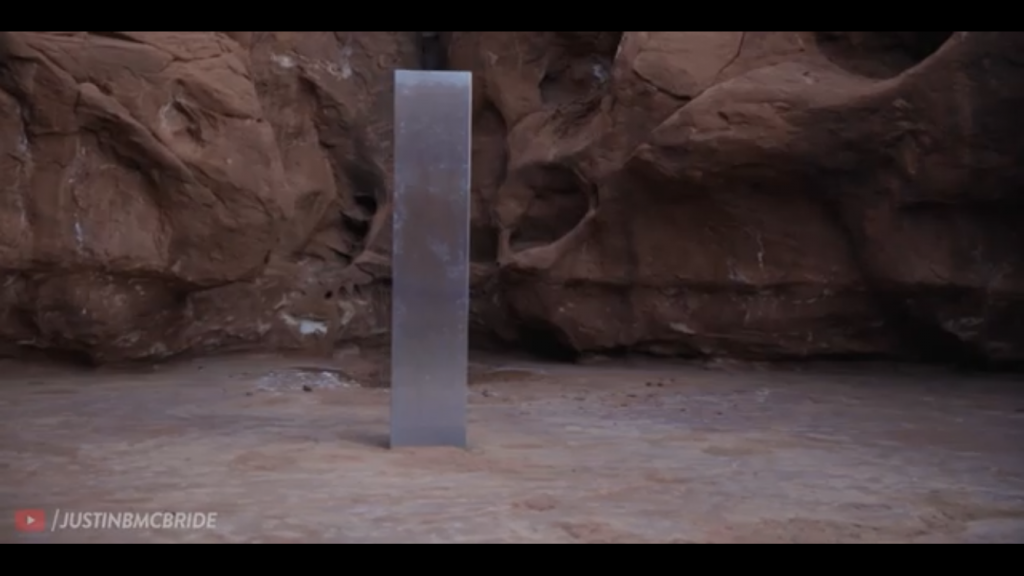 The crew of a Utah Department of Public Safety helicopter has discovered a mysterious monolith in the middle of the desert in Southern Utah. Nestled into a red-rock cove, the 10-foot-high metal artifact appears to have been deliberately imbedded into the sand, protruding straight from the ground. The helicopter crew was unable to ascertain the monolith’s origin or purpose during their November 18 encounter, but is glad to not have been disintegrated or transported to another dimension after coming into contact with the metal monument.

The DPS crew was accompanied by a number of Utah Division of Wildlife Resource officers conducting an aerial survey of the bighorn sheep in the area when one of the scientists spotted the gleaming monolith on the red ground below.

“One of the biologists is the one who spotted it and we just happened to fly directly over the top of it,” explained pilot Bret Hutchings, in an interview with Salt Lake City’s KSLTV. “He was like, ‘Whoa, whoa, whoa, turn around, turn around!’ And I was like, ‘what.’ And he’s like, ‘There’s this thing back there – we’ve got to go look at it!'”

Hutchings circled the helicopter back and landed so that the team could get a better look at the mysterious metal object. Tucked into a rock cove, the 10-foot tall monolith is imbedded firmly in the ground, protruding 10 feet straight up out of the soil of the cove’s floor; it appears to be roughly 2 feet wide on each of its sides, and the metal it is made from—possibly aluminum–appears uncorroded.

“I’d say it’s probably between 10 and 12 feet-high,” Hutchings said. In one photograph taken by the survey team a crew member is standing on the shoulders of another to take a look at the top of the monolith, implying that the object is roughly 10 feet (3 meters) tall. “We were kind of joking around that if one of us suddenly disappears, then the rest of us make a run for it.”

But the monolith, or whomever (or whatever) had installed it in such a remote location, left no clue as to its origin or purpose.

“We were, like, thinking is this something NASA stuck up there or something. Are they bouncing satellites off it or something?” Hutchings pondered. But they quickly determined that there appeared to be no apparent scientific purpose to the object. Perhaps an artistic sculpture of some sort?

“I’m assuming it’s some new wave artist or something or, you know, somebody that was a big 2001: A Space Odyssey fan,” Hutchings guessed.

The helicopter crew is keeping the exact location of the object a secret for the time being, to avoid having to rescue inexperienced pilgrims that might get stranded while looking for the site. But regardless of where it came from or why it’s there, Hutchings knows one thing for certain about the mysterious monolith:

“That’s been about the strangest thing that I’ve come across out there in all my years of flying.”

Subscribers, to watch the subscriber version of the video, first log in then click on Dreamland Subscriber-Only Video Podcast link.
2020-11-25
Previous Headline News Post: As Above, So Below: New Study Finds Striking Similarities Between the Structure of the Universe and the Human Brain
Next Headline News Post: Utah Monolith Disappears–and We May Know Why (Or Not…)