Happy Holidays from Around the Solar System! 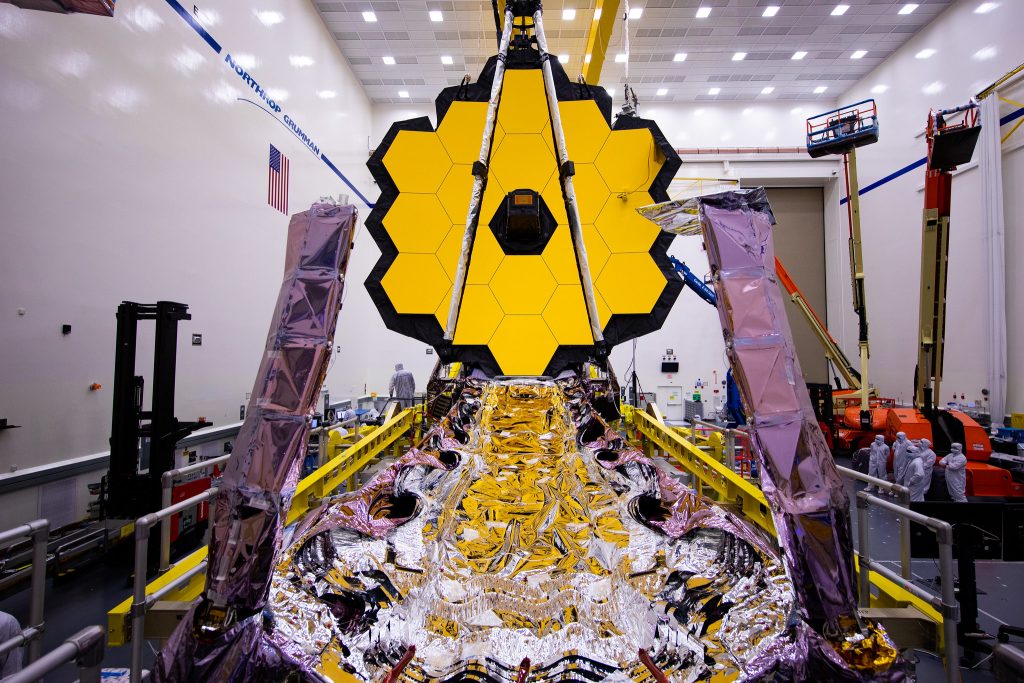 Although there is no news that Santa Claus has been successful in conquering the hearts of the Martians (yet), there is plenty of other news from not only Mars, where significant amounts of water have been found in a very significant valley, but also closer to the Sun, recently having been ‘touched’ by an investigating spacecraft, and also closer to home, where the countdown to the Christmas Day launch of the James Webb Space Telescope is now underway.

Starting out here on Earth, the long-delayed James Webb Space Telescope (JWST) is scheduled to launch on December 25 at 12:20 UTC (7:20 AM EST, 4:20 AM PST, you can watch the launch live on NASA Live’s livestream) from the Guiana Space Centre in French Guiana, aboard an Ariane 5 rocket. After leaving the planet’s atmosphere, the observatory will begin its 29-day journey to a position 1,500,000 kilometers (930,000 miles) from Earth, on the side of the planet directly opposite from the Sun. This is an area called the second Lagrange point (L2); Lagrange points are areas of space where the gravity of two bodies—in this case the Earth and the Sun—and the centrifugal force experienced by objects orbiting in this area are in equilibrium.

After arriving at its intended position, JWST will unfurl a series of solar shields designed to keep its sensitive instruments cool, and deploy the array of 18 hexagonal mirrors that will focus the light from distant objects onto the telescope’s secondary mirror. The craft’s instruments will be allowed to cool down to nearly absolute zero over several weeks, then begin a 5-month calibration period to prepare JWST for its task of peering into the far reaches of the universe.

Intended to be the successor to the Hubble Space Telescope (HST), JWST is designed to operate for ten years; its 6.5-meter (21-foot) mirror will gather more light than HST’s 2.4-meter (7.8-foot) reflector, allowing JWST’s instruments to make more detailed observations; additionally, JWST will gather light from a lower portion of the electromagnetic spectrum than HST, allowing it to see objects that are so distant that the visible light emitted from them has shifted into the mid-infrared. This capability will allow JWST to, quite literally, see farther into the universe than Hubble was capable of.

Closer to the Sun—much, much closer to the Sun—the Parker Solar Probe has made history by dipping into our home star’s upper atmosphere, effectively “touching the Sun”, as associate administrator for NASA’s Science Mission Directorate Thomas Zurbuchen put it, allowing the probe to collect gas samples and take readings on the Sun’s magnetosphere.

“Parker Solar Probe ‘touching the Sun’ is a monumental moment for solar science and a truly remarkable feat,” Zurbuchen said in a statement. PSP’s eccentric orbits were designed to carry the probe closer and closer to the Sun with each new pass, putting the spacecraft in a position to gather data that might unlock the numerous mysteries that Sol still hides from us.

Aside from the mysteries still held by the solar winds, the gasses in the Sun’s upper atmosphere, called the corona, can reach up to one million degrees Kelvin (1.8 million°F), despite the Sun’s surface only reaching 6,000°K (10,340°F), for reasons still unknown to science. Don’t worry about Parker melting, though: the molecules that make up the Sun’s corona, despite being unimaginably hot, are too sparse to impart any meaningful amount of heat to the probe’s surface.

Switching to cooler locales, the ExoMars Trace Gas Orbiter has found evidence of significant amounts of water hidden in Mars’ Valles Marineris, a cavernous abyss nine times longer, seven times wider and nearly four times deeper than Earth’s Grand Canyon. The orbiter maps hydrogen concentrations, an indicator of the presence of water, in the Martian soil up to a meter in depth, and found that an area at the bottom of the valley the size of The Netherlands appears to be sopping wet—comparatively speaking, of course.

“[ExoMars’ instruments] revealed an area with an unusually large amount of hydrogen in the colossal Valles Marineris canyon system: assuming the hydrogen we see is bound into water molecules, as much as 40% of the near-surface material in this region appears to be water,” according to Igor Mitrofanov, the Principal Investigator for the mission’s High-energy Neutron Detector.

Although the discovery of water on Mars is old news, up until now the majority of the water has been found at the planet’s poles, a cold environment that can sustain ice (and in some cases, liquid) water; Valles Marineris, however, is very close to the equator, where temperatures can peak at a downright-tropical 35°C (95°F) at certain times of the year, so hosting large amounts of water is no mean feat considering that the planet’s low atmospheric pressure brings the boiling point of pure water down to -5°C (23°F).

ExoMars’ researchers believe that the water is in the form of ice found just below the Martian surface, “very much like Earth’s permafrost regions, where water ice permanently persists under dry soil because of the constant low temperatures,” according to study co-author, Alexey Malakhov.

Regardless of what planet you’re on, we here at Unknown Country wish you a safe and happy holiday season!

Subscribers, to watch the subscriber version of the video, first log in then click on Dreamland Subscriber-Only Video Podcast link.
2021-12-22
Previous Headline News Post: AI Gets Existential: A Machine Debates the Ethics of Its Own Existence
Next Headline News Post: SNOOPIE Meets the Ghostbusters: FOIA Documents Shed New Light on the Navy’s 2019 UAP Encounters