Glacial Melt May Release Ancient Diseases Locked in the Ice, Are They Still Infectious? 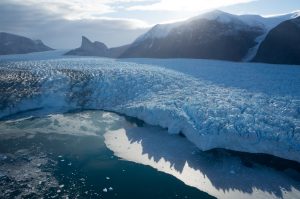 While one of the main concerns regarding the ongoing melt of Arctic permafrost is the release of greenhouse gases such as methane previously trapped in the frozen soil, there are other elements, such as ancient viruses and bacteria that could pose a potential danger to humanity as they are discharged from their icy tombs.

But do these archaic pathogens present an actual danger to humans and the environment? An international team of researchers is exploring that very question: with over a million years worth of organic matter trapped in the rapidly (sometimes explosively!) melting soil it’s reasonable to assume that something hazardous might accompany the rest of the otherwise benign microbes present.

Such a scenario isn’t just the object of speculation, with instances of anthrax spores being released from melting permafrost infecting not only herds of reindeer in Siberia, but also the members of a village on Russia’s Yamal Peninsula in 2016, resulting in the death of one of their children.

The researchers participating in this new study examined 13 newly-catalogued viruses that were extracted from permafrost samples taken from Siberia; three of these viruses were found in the petrified remains of a 27,000-year-old mammoth, and another was recovered from the entrails of a frozen Siberian wolf.

The research team thawed the viruses, and then sequenced their genomes before infecting cultures of commonly-found amoeba with the prehistoric pathogens; despite some of the viruses being at least 48,000 years old, several of the samples successfully infected the amoeba, replicating to produce fresh virus particles.

Although these pathogens might sound like a pandemic-triggering ticking time bomb, none of the viruses were capable of infecting an animal host.

“The ones we revived are no danger at all; they only infect amoeba,” explains study co-author Jean-Michel Claverie, a computational microbiologist at France’s Aix-Marseille University. “But their presence and infectivity suggests that ancient viruses infecting animals/humans could still be infectious.”

One of the outcomes of this study is the disproving of the notion that permafrost contains few viable microbes, a scenario that would mean that the mass-melt being observed in the Arctic isn’t likely to present a danger to modern humans in that regard; on the contrary, the study identified trace evidence of other microbes that are related to species known to infect humans, such as poxviruses and herpesviruses.

These more familiar microbes likely wouldn’t present as significant a danger to modern populations, as vaccines designed for today’s pathogens would offer at least some protection against their ancient counterparts. However, the real danger might lie in dormant viruses that we aren’t familiar with and have no prior immunity, such as the COVID-19 pandemic-causing SARS-CoV-2 coronavirus.

Unfortunately, the current political situation in Russia has halted the collection of new Siberian permafrost samples, although the research team says that they are at least able to continue their research using the samples they already have on hand.