For Skywatchers This Month, the Early Bird Catches The… SWAN? 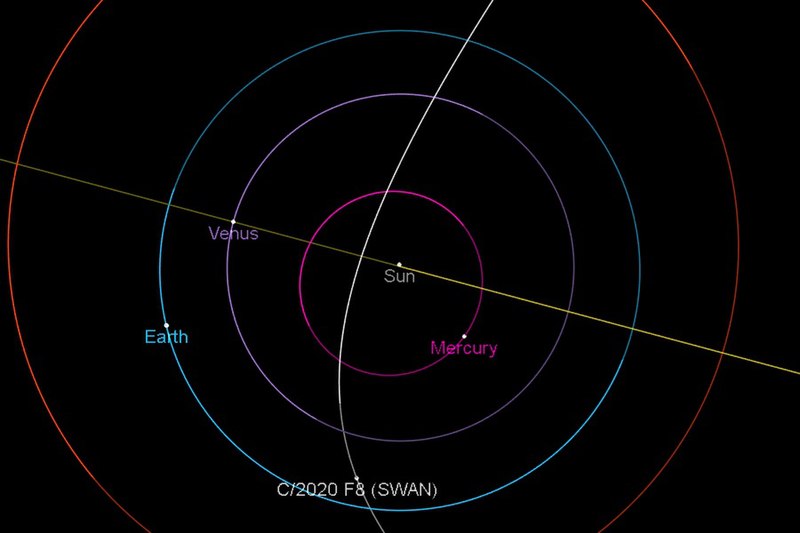 Comet Atlas may have fizzled as it came ’round the Sun, but its replacement, C/2020 F8—better known as Comet SWAN—has fared better in its approach to the center of the Solar System, and although it is likely to become just bright enough to be visible to the naked eye, skywatchers will still have to get up pretty early in the morn’ to catch this long-tailed beauty.

Named after the SWAN camera equipped on the Solar Heliospheric Observer (SOHO) spacecraft that discovered the object, Comet SWAN made its closest approach to Earth on May 12, visible to observers in the Southern Hemisphere as a magnitude 5.1 (just bright enough to be visible to the unaided eye), sporting a fuzzy green coma and a tail long enough to cover an 8-degree arc of sky—that’s 16 times longer than the width of a typical full moon!

The catch-22 with comets is that as they get closer to the Sun they grow brighter, but that increased luminosity winds up competing with Sol’s brilliance. Comet SWAN will reach its closest approach to the Sun on May 27, and depending on local conditions should be visible about 90-120 minutes before sunrise in Pisces, just above Eta Piscium.

From May 23 to June 10 Comet SWAN will be better seen just after sunset as it moves from the eastern portion of Perseus into Auriga; although the comet’s brightness will be declining in this period, the time of day and its increasing distance from the Sun may allow it to be seen more easily.

In the event that SWAN becomes too dim to be seen without aid, it should still be readily visible through binoculars, and with a little luck that 10 million-mile-long tail should serve up a tasty visual treat for skywatchers.

Subscribers, to watch the subscriber version of the video, first log in then click on Dreamland Subscriber-Only Video Podcast link.
2020-05-15
Previous Headline News Post: Do Our Genes Hold the Key as to Who Is Susceptible to COVID-19?
Next Headline News Post: Eight Official Hazard Reports Involving UFO Encounters Have Been Released by the U.S. Navy