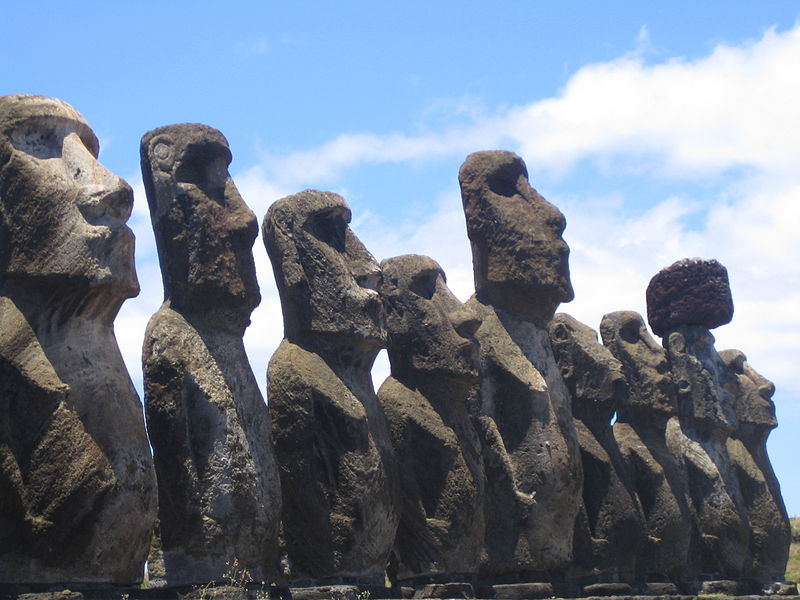 The enigmatic moai, the imposing statues that stand guard over the island of Rapa Nui—more commonly known as Easter Island—have long presented a mystery to the modern world, the story of their true origins having been lost to the sands of time, in stories largely lost by the descendents of the Rapa Nui people. But a new chemical analysis of the rock that these megaliths were carved from may have confirmed one of their presumed roles, in that they may have been important fertility idols—in a very literal sense.

There are nearly 1,000 known moai on Rapa Nui, monolithic effigies that stand up to 10 meters (33 feet) tall, with most of them carved from volcanic tuff—volcanic ash that has been compressed into rock—found in only one spot on the island, the quarry at Rano Raraku. Paradoxically, nearly half of the moai are still located in the quarry that they were carved from, with the remainder having been moved after their construction to their present positions along the island’s coastline.

The true purpose behind the moai have been lost to history, although it has been presumed that they were status symbols commissioned by wealthy Rapa Nui, and believed to be vessels for sacred spirit, imbued with spiritual mana when certain rituals were performed. They are also believed to be the guardians of the inhabitants of the island, as most of them face inland, with those facing out from the coast watching over sailors at sea.

But the moai may also have had significance as fertility idols—quite literally. Researchers found that the tuff that the statues are carved from contain chemicals that can provide valuable nutrients for the island’s soil.

“When we got the chemistry results back, I did a double take,” explains geoarchaeologist Sarah Sherwood from the University of the South in Sewanee, Tennessee, regarding the chemical analysis her team conducted on the soil at Rano Raraku.

“There were really high levels of things that I never would have thought would be there, such as calcium and phosphorous. The soil chemistry showed high levels of elements that are key to plant growth and essential for high yields.”

This source of fertilizer would be of vital importance to the Rapa Nui people, as the nutrients in the island’s soil was steadily being depleted. The quarry at Rano Raraku itself was also a rich agricultural site, with evidence of the cultivation of plants like banana, taro, sweet potato, and paper mulberry having been found there.

“Everywhere else on the island the soil was being quickly worn out, eroding, being leeched of elements that feed plants,” according to Sherwood. “But in the quarry, with its constant new influx of small fragments of the bedrock generated by the quarrying process, there is a perfect feedback system of water, natural fertilizer and nutrients.”

This would explain why many completed moai are situated in Rano Raraku, watching over the site of the island’s richest crops, while many of their brethren are positioned along the coastline.

“This study radically alters the idea that all standing statues in Rano Raraku were simply awaiting transport out of the quarry,” says UCLA archaeologist Jo Anne Van Tilburg.

“These and probably other upright moai in Rano Raraku were retained in place to ensure the sacred nature of the quarry itself. The moai were central to the idea of fertility, and in Rapa Nui belief their presence here stimulated agricultural food production.”

The people of Rapa Nui may also have transplanted soil—possibly considered sacred—from Rano Raraku to key points around the island, to enrich the depleted earth in those areas. “We venture the novel suggestion that based on these data, and on the ritualisation of Rano Raraku and its stone as megalithic resources, Rano Raraku soil/sediment itself was a valuable and protected commodity,” the authors explain in the study paper. “Soil could have been transported from Rano Raraku to enrich those areas needing increased productivity.”