Dimming Supergiants and Strange Gravity Waves: Is Betelgeuse About to Explode? 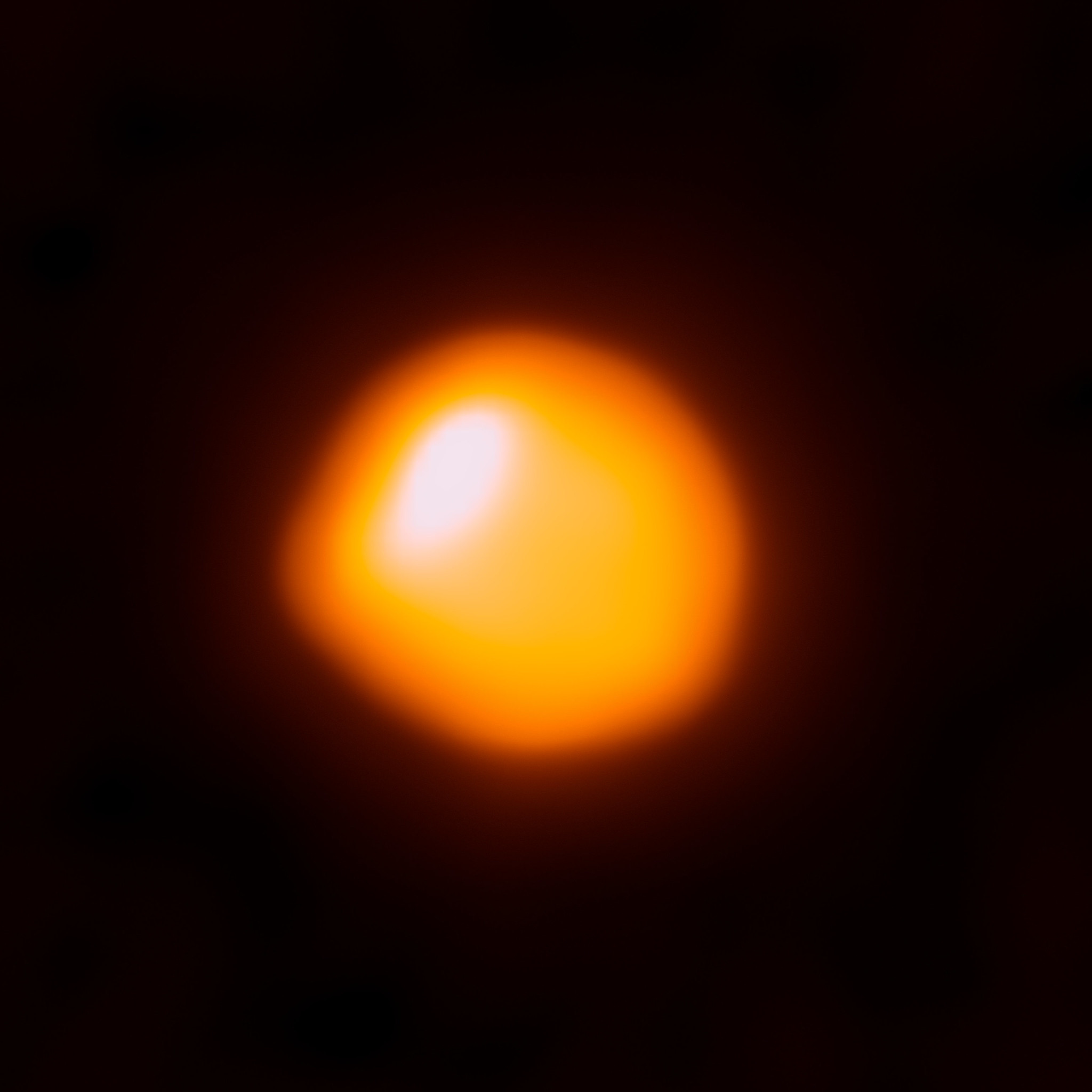 For the past month the star Betelgeuse has been acting strangely, having dimmed to a luminosity lower than at any point in history, prompting speculation that the supergiant star might be about to explode into a supernova. Although astronomers point out that this is an unlikely event, a strange gravity wave was detected coming from the star’s direction, deepening the question as to what is going on with Betelgeuse.

Located approximately 700 light-years away on the shoulder of Orion, Betelgeuse, classified as a red supergiant, is big… really, really big: if it were to replace the Sun at the center of our Solar System, its surface would extend out to Jupiter’s orbit. Weighing roughly 11 solar masses, Betelgeuse is also moving very fast, at a speed of 30 kilometers per second (18.6 miles per second), creating a bow shock through the interstellar medium over four light-years wide.

Betelgeuse is also a variable star, with an apparent magnitude that fluctuates between +0.0 and +1.3. But in late December 2019, the star’s brightness dipped to magnitude 1.5 (higher numbers mean less brightness), dimming the star to levels that have never been seen in recorded history, and knocking it off the list of the 10 brightest stars in the night sky, down into the top 20.

Supergiant stars like Betelgeuse live fast and hard, burning though their hydrogen fuel in a matter of only a few million years—Betelgeuse itself is estimated to be less than 10 million years old—and erupting into a brilliant supernova at the end of their lives, leaving behind either a neutron star or black hole. The star would begin to collapse in on itself in the lead-up to the cosmic explosion, causing it to appear as if it were dimming from our viewpoint on Earth; this is why the star’s strange dimming has prompted the speculation into whether Betelgeuse is about to go nova. But although this is a possibility, astronomers are pointing out that this probably isn’t the case, as there is an estimated 100,000 years left on the clock before Betelgeuse goes boom.

What is most likely happening is an odd synchronicity between two of Betelgeuse’s known dimming cycles: although Betelgeuse’s brightness changes, it is known as a semiregular variable star, meaning that the dips in its luminosity occur in regular cycles. There are two known cycles: one that happens roughly every 425 days, and another that occurs every 5.9 years; it is possible that these two cycles happen to have occurred at the same time, dropping Betelgeuse’s brightness to record lows.

There are also a number of other possibilities that could be causing the star’s dimming, such as gas or dust erupting from the star’s surface, but the mystery deepened on January 14 when the LIGO/VIRGO network of gravity-wave observatories detected what are called “burst waves” coming from Betelgeuse’s direction.

Needless to say, Betelgeuse itself didn’t cause the burst of gravity waves—it’s still visible in the night sky—and the astronomers at LIGO point out that the waves only came from the direction of Betelgeuse, not that they necessarily came from the star itself, and could have originated from an event much further away. There is also speculation from the LIGO team that the detection might simply be a glitch in the system, although they calculate such an occurrence to be a 1-in-25-year event.

Regardless of whether or not the gravity waves are legitimate or just a glitch, it is possible that the two events are just a coincidence. If Betelgeuse does indeed burst into a supernova, it would become the brightest object in the night sky for weeks or months—possibly even brighter than the moon—before it fades back into the black of space. Thankfully, Betelgeuse’s distance from Earth means that we wouldn’t have to worry about the intense radiation or fast-moving debris ejected from the newly-exploded star.

Subscribers, to watch the subscriber version of the video, first log in then click on Dreamland Subscriber-Only Video Podcast link.
2020-01-22
Previous Headline News Post: Release of UFO Documents Would Compromise Us National Security, According to US Navy
Next Headline News Post: Virulent Coronavirus Outbreak Prompts High-Level Quarantine in Central China