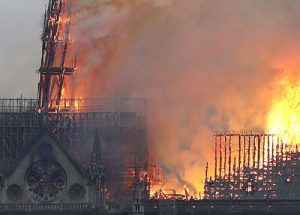 Notre Dame Cathedral, one of the world’s most beautiful and iconic cathedrals, has experienced a catastrophic fire. The stone roof has collapsed into the nave and many if not all of the magnificent stained glass windows have been severely damaged or destroyed.

The fire began at 6:50 pm Paris time and was contained in the small hours of the morning. Paris Fire Chief Jean-Claude Gallet has said that the remaining structure has been saved. The spire, a 19th Century addition, has fallen into the nave and there is extensive damage to the cathedral and its treasury of art works, but it appears that some of the masterpieces have been saved.

The cause of the fire isn’t yet known, but the cathedral was under renovation at the time, and the fire apparently started in the roof area where the renovation work was in progress. However, it is also the beginning of Holy Week, the most important Christian religious festival of the year. Yesterday, Palm Sunday, the cathedral was filled with thousands of people, but this evening there were few inside when the fire erupted.

Leaders around the world have responded with shock and dismay, and the Vatican has issued a statement expressing support for the firefighters and sorrow at the catastrophe that has befallen this great Catholic and Christian monument.

Construction on the cathedral began in 1163 and was completed 1345. Over its 856 year history, the cathedral has seen the history of Europe and mankind unfold. Napoleon was crowned Emperor of France in the cathedral in 1804, and Joan of Arc was beatified there by Pope Pius X in 1909. It is the location of one of the greatest stories ever told, Victor Hugo’s “the Hunchback of Notre Dame,” which inspired a rebuilding of the cathedral in the mid-nineteenth century.

The cathedral is a great symbol of human spiritual aspirations and the journey of man toward God.

Subscribers, to watch the subscriber version of the video, first log in then click on Dreamland Subscriber-Only Video Podcast link.
2019-04-15
Previous Headline News Post: An Ancient Species of Humans — and a New Mystery — has been Discovered
Next Headline News Post: Astronomers Have Released the First Direct Image of a Black Hole