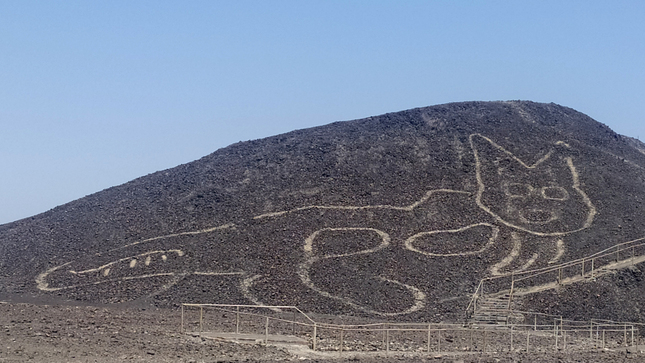 Archaeologists in Peru have uncovered a previously-undiscovered member of the Nazca Line family: the image of a giant cat, etched into the side of a hill initially intended to be the site of a new tourist path. This formidable feline joins a menagerie made up of birds, monkeys, fish, reptiles, and other creatures and designs that call the Nazca Plateau home.

The 37-meter (121-foot) ancient artwork, estimated to be nearly 2,000 years old, had gone unnoticed by modern archaeologists due to its position on the side of a hill. A statement from Peru’s Ministry of Culture explained that this particular image “was about to disappear because it’s situated on quite a steep slope that’s prone to the effects of natural erosion.”

“The figure was in the process of disappearing because it was on a slope that was subject to quite extensive erosion which resulted in it being hidden for many years,” according to Johny Isla, a Nazca specialist with the Ministry of Culture.

The image was rediscovered during the construction of a path that leads to a nearby observation platform. Dated to the region’s Late Paracas period between 200-100 BCE, the image of the lounging critter is made up of grooves carved into the mountain coupled with groupings of stones. The image has since been restored, so that the great cat can once again bask in the sun.

“It’s quite striking that we’re still finding new figures, but we also know that there are more to be found,” Isla said.

Subscribers, to watch the subscriber version of the video, first log in then click on Dreamland Subscriber-Only Video Podcast link.
2020-10-23
Previous Headline News Post: This September Was the Hottest Month on Record: Will 2020 Be the Hottest Year?
Next Headline News Post: U.S. COVID-19 Number Surge To Record Highs; Experts Warn Worst Is Yet To Come