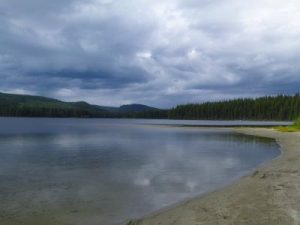 The increase in average annual temperatures across the country of Canada has risen by more than double the current global average, according to a report commissioned by the Government of Canada that was leaked to the Canadian Broadcasting Corporation (CBC) on April 1. The report also says that temperatures in Northern Canada have increased by 2.3°C (4.1°F) — nearly three times the global average — underscoring how much faster the planet’s polar regions are warming than the rest of the Earth.

This temperature increase is more than double the 0.8°C (1.4°F) rise currently being observed in the global average, but one must bear in mind that the global average increase is being measured over a period of time beginning in the mid-nineteenth century, while the CCCR report is showing Canada’s warming trend only since 1948, meaning that Canada overall has experienced twice the rate of warming in roughly half the amount of time, as compared to the rest of the planet.

According to the report, this temperature change has brought with it increased precipitation, particularly in the winter months; “extreme fire weather”, as evidenced by the increasingly devastating wildfires occurring in western Canada, along with summer water supply shortages, and a heightened risk of coastal flooding.

Under a medium emission scenario, the report predicts that “glaciers across the mountains of western Canada will lose 74% to 96% of their volume by late century,” and that “most small ice caps and ice shelves in the Canadian Arctic will disappear by 2100.” And even under the best case scenario, Arctic permafrost is expected to continue to melt, disrupting human infrastructure in the affected regions, and releasing more greenhouse gases such as methane, previously locked away in the frozen ground.

The report explains that while natural climate variations might have “contributed to the observed warming in Canada, the human factor is dominant.” It also warns that while average national temperatures could plateau at 1.8°C (3.2°F) over 1948 levels if the 2.0°C (3.6°F) cap called for by the Paris climate agreement is met, Canada could warm by 6.3°C (11.3°F) by the end of the century if greenhouse gas emissions are left unchecked.

Subscribers, to watch the subscriber version of the video, first log in then click on Dreamland Subscriber-Only Video Podcast link.
2019-04-10
Previous Headline News Post: Russian Special Forces Use Psychic Techniques on the Battlefield
Next Headline News Post: An Ancient Species of Humans — and a New Mystery — has been Discovered