The mysterious astronomical phenomenon known as fast radio bursts has yielded a new breakthrough, in that astronomers have now been able to trace one of these mysterious signals back to its source, having originated a long time ago in a galaxy far, far away—over three and a half billion light-years away, in fact. With the exception of only one out of the handful of known repeating FRBs, this is the first time that researchers have been able to find the origin of a “one-off” fast radio burst, one more step in unraveling the enigma of these mysterious signals from deep across space and time.

Generating as much energy as hundreds of millions of Suns, yet only lasting for a mere fraction of a second, the mysterious phenomenon known as fast radio bursts (FRB) were first discovered in 2007 by astronomers that were reviewing archival data gathered by Australia’s Parkes radio dish. The strange burst lasted for only 5 milliseconds and came roughly from the direction of the Small Magellanic Cloud, a dwarf galaxy near to our own. But the properties of this powerful yet mysterious signal indicated that its source was much farther away.

Numerous FRBs have been spotted since, including three that appear to have repeated, and although the cause of such powerful bursts remains a mystery, they all appear to have originated from outside the Milky Way Galaxy.

One of the few repeating FRBs, known as FRB 121102, has allowed astronomers to trace its signals back to its source in an unnamed dwarf galaxy 3 billion light-years away, in the direction of the constellation Auriga. FRB 121102 itself, a mystery amongst mysteries, has winked at astronomers over 300 times since November 2, 2012, including a 24-minute event that produced 15 flashes.

The repetitive nature of FRB 121102 is what allowed astronomers to trace it back to its source, but the single-burst nature of the other instances typically don’t provide researchers with enough information to pinpoint where they came from.

FRB 180924, on the other hand, is the first non-repeating FRB to have had its origin revealed, hailing from a galaxy 3.6 billion light-years distant. The FRB itself was discovered using the Australian Square Kilometre Array Pathfinder (ASKAP); the team then scoured the region of the sky that the burst appeared in with the Very Large Telescope and the Gemini Observatory in Chile, and the W. M. Keck Observatory in Hawaii to uncover the distant galaxy that the September 4, 2018 burst came from. 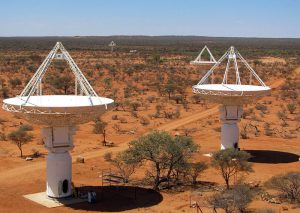 Narrowing down the source of these fast radio bursts helps researchers figure out what it is that’s causing them: speculation on the generation of the briefly-lived, massive energy bursts includes phenomenon such as the explosion of black holes to the collision of neutron stars and white dwarf stars, but without more clues, there’s no way to verify if any of the ideas put forth are valid or not.

In this case, the galaxy FRB 180924 originated in is an older, less active body of stars similar in size to the Milky Way, in contrast to the small, active galaxy FRB 121102’s numerous flashes appear to have come from.

“The burst we localized and its host galaxy look nothing like the ‘repeater’ and its host,” explains Adam Deller, an astrophysicist at Swinburne University of Technology in Australia and co-author of the new study. “It comes from a massive galaxy that is forming relatively few stars. This suggests that fast radio bursts can be produced in a variety of environments.”

Subscribers, to watch the subscriber version of the video, first log in then click on Dreamland Subscriber-Only Video Podcast link.
2019-07-08
Previous Headline News Post: Physicists Plan to Open a Portal to a Mirror Universe
Next Headline News Post: The US’s Largest Wildfire is Currently in Alaska, Fueled by Record-Breaking Temperatures