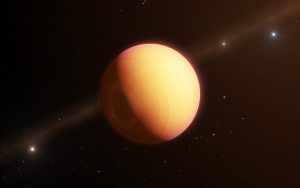 Astronomers with the European Southern Observatory (ESO) have broken new ground in exoplanet research by directly observing a planet in another solar system using a new imaging technique. This new method provided enough detail about the far-flung planet to reveal the presence of a complex, planet-wide storm—and a strange puzzle regarding the planet’s atmospheric chemistry.

ESO astronomers used this new technique, called “optical interferometry”, to combine individual images of the planet in question, images that were taken by the four telescopes that comprise the Very Large Telescope (VLT). The resulting data provided the researchers with enough detail to be able to separate the planet from its parent star, allowing them to observe an exoplanet directly for the first time.

“Our observations suggest a ball of gas illuminated from the interior, with rays of warm light swirling through stormy patches of dark clouds,” a beautiful image evoked by Sylvestre Lacour researcher CNRS at the Observatoire de Paris – PSL and the Max Planck Institute for Extraterrestrial Physics. “Convection moves around the clouds of silicate and iron particles, which disaggregate and rain down into the interior. This paints a picture of a dynamic atmosphere of a giant exoplanet at birth, undergoing complex physical and chemical processes.”

Orbiting a very young star 129 light-years away in the Pegasus constellation, HR8799e is a gas giant that astronomers call a “super Jupiter”, estimated to be five to ten times more massive than our own Jupiter. However, unlike 4.5-billion-year-old Jove, HR8799e is estimated to be a mere 30 million years old—the dinosaurs were already 35 million years dead by the time this planet began to form—meaning this detailed new view of a distant world is providing valuable new clues as to how star systems form, and at the same time is raising new mysteries.

“Our analysis showed that HR8799e has an atmosphere containing far more carbon monoxide than methane — something not expected from equilibrium chemistry,” Lacour explains. “We can best explain this surprising result with high vertical winds within the atmosphere preventing the carbon monoxide from reacting with hydrogen to form methane.”

The majority of methods used to find exoplanets are done so indirectly, but this interferometry technique, used last year to directly image clumps of superheated gas orbiting the edge of the supermassive black hole at the center of our galaxy, promises to provide even more impressive discoveries in the field of exoplanet research.

Image Credit: “…This artist’s impression shows the observed exoplanet, which goes by the name HR8799e.” eso.org via Wikimedia Commons

Subscribers, to watch the subscriber version of the video, first log in then click on Dreamland Subscriber-Only Video Podcast link.
2019-03-30
Previous Headline News Post: Extensive Flooding in the U.S. This Spring is being Forecast by NOAA
Next Headline News Post: Moths Eat Shroud of Turin