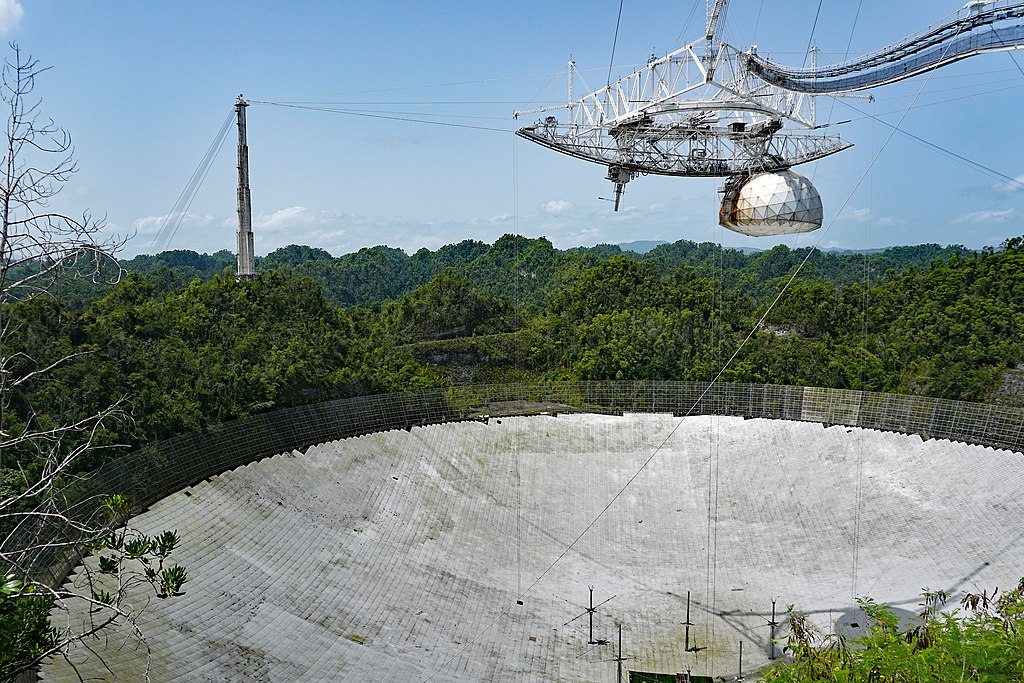 The National Science Foundation (NSF) has announced that the iconic Arecibo radio telescope has been slated for demolition, following a structural assessment that found that the structure is structure is “currently at risk of an unexpected, uncontrolled collapse,” according to the director of NSF’s Division of Astronomical Sciences, Ralph Gaume.

On August 10 one of the 3-inch-thick auxiliary cables that suspend the telescope’s massive receiver assembly 492 feet (150 meters) above the 1,000 foot (305 meter)-wide reflector dish failed, leaving a 100 foot (30 meter) gash in the aluminum panels that make up the reflector’s surface; the incident prompted a damage assessment and an order for replacement cables was issued.

On November 6 a second cable snapped; however this time it was one of the main cables that had failed. With the integrity of the entire structure now in question, a drone-based evaluation of the remaining cables found that there was no safe way to repair the massive assembly, as the remaining 7.5-ton cables could fail at any time, causing the 900-ton receiver to crash into the dish below.

“A break of one more cable on Tower 4 will likely result in an uncontrolled collapse, in which the platform will come crashing down into the main dish,” Gaume explained. “It’s also possible the three main towers themselves—all 300 feet tall—will potentially topple over.”

According to Gaume, even having engineers make an in-person inspection of the remaining cables isn’t safe, as the structure is “currently at risk of an unexpected, uncontrolled collapse,” meaning a controlled demolition “gives us the opportunity to preserve the remaining assets at this observatory,” a key component of Puerto Rico’s STEM educational capability. Although the 1,000-foot reflector dish is the Arecibo Observatory’s most prominent feature visually, the site is home to numerous other facilities assembled below Tower 12, including a LIDAR array used to study the Earth’s atmosphere.

“I want to say this as forcefully as possible,” Gaume stated, that despite the announced demolition of the main dish, “we’re not closing the Arecibo Observatory.”

Built over a karst sinkhole that enables the reflector dish’s shape, the Arecibo Observatory opened in 1963 and has facilitated numerous discoveries made by astronomers over its 57 years of operation, including an accurate measurement of the length of a day on Mercury, the confirmation of the existence of neutron stars, and the discovery of the first millisecond pulsar, PSR B1937+21, a neutron star that spins at 642 times per second. The observatory is also equipped with a powerful radar array that has been used to directly image small, dim celestial bodies such as asteroids.

The observatory is most famous for the SETI (Search for Extra-Terrestrial Intelligence) projects conducted there, including the 1974 transmission of the Arecibo Message, an image broadcast toward the globular cluster Messier 13, 25,000 light-years distant. The Arecibo array was featured in film and television in the 90s, appearing in GoldenEye (1995), Species (1995), The X-Files (1995’s Little Green Men) and Contact (1997).

Subscribers, to watch the subscriber version of the video, first log in then click on Dreamland Subscriber-Only Video Podcast link.
2020-11-20
Previous Headline News Post: Mood Disorders and Vivid Hallucinations: COVID-19’s Devastating Effects on the Brain
Next Headline News Post: As Above, So Below: New Study Finds Striking Similarities Between the Structure of the Universe and the Human Brain