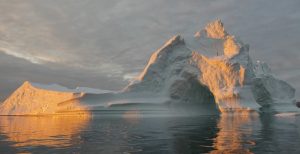 Following an abnormally warm spring, the Arctic has lost a record amount of ice for the month of June,  from both sea surface ice and glaciers in Greenland. On June 12, parts of Greenland saw temperatures rise up to 40°F (22°C) above normal, but not before the sea ice extent shrunk to 494,983 square miles (1,282,000 square kilometers) below the 1981-2010 average for June 10.

To put his in perspective, the nearly half-million square miles of missing ice is an area larger than the states of Arizona, California, Nevada and Oregon combined. Although June isn’t over yet, 2016 held the previous record for lowest ice extent for this time of the year. And a high-pressure system is forecast to remain in place over Greenland from now until the end of August, a situation that could mean more warm weather for parts of the Arctic, accompanied by accelerated ice melt.

Although the years since have seen better ice coverage, the overall trend since the late 1970s is a steady year-over-year decrease in the size of the planet’s ice cap. It still remains to be seen as to whether or not 2019 will break the 2012 record.

Earth’s polar ice is important in that it reflects solar radiation back into space, helping to keep temperatures stable. However, as the ice melts, it exposes open water that absorbs solar radiation much easier than the ice would have, contributing to the planet’s absorption of yet even more heat.