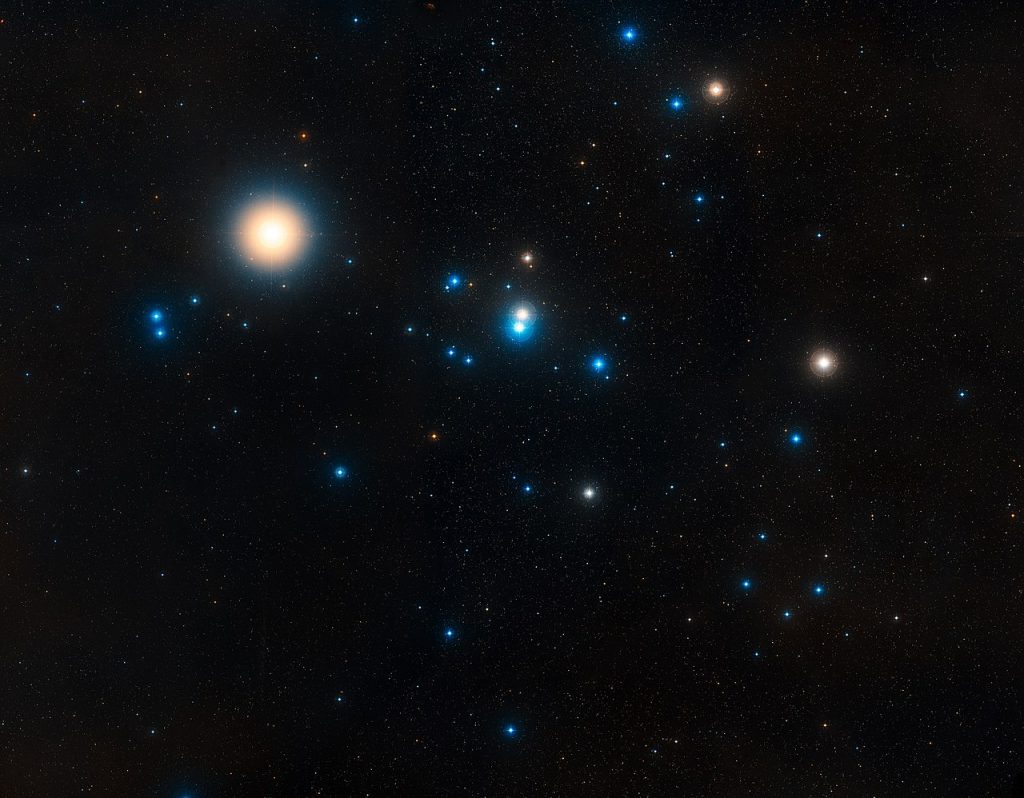 An invisible force has been pulling apart one side of  the nearby Hyades star cluster, leaving the tail of the stellar group partially devoid of stars.  The astronomers who noticed the phenomenon suspect that a dark matter structure with the mass of 10 million suns is behind the mysterious gap carved into the cluster.

Hyades’ brighter stars form a V-shaped mini-constellation on their own, the Hyades star cluster forms the head of Taurus’s bull, and is located only 153 light-years from Earth; although the very bright star Aldebaran appears in the same spot in the sky as the Hyades, it isn’t part of the cluster, being only about 65 light-years distant. The cluster is also fairly young—about 625 million years old—with the core of the cluster being 8.8 light-years across.

Over time, the gravitational forces of the Milky Way have been slowly pulling stars from the cluster, drawing them out into “tidal tails” that stream along for thousands of light-years both in front of and behind the cluster.  The Hyades was first pointed out in a study published in 2019, using data gathered by the European Space Agency’s (ESA) Gaia space observatory.  A survey using more recent data delivered by Gaia revealed a sizable number of stars in one of these tails are missing.

The research team first produced a computer model of the star cluster to predict the current positions of individual stars within the cluster, and stars that have drifted out to form the tails.  This allowed the team to identify physical stars that are part of this extended celestial family.  But while the simulation predicted that the tails would be relatively symmetrical, the structures mapped by Gaia showed that there were a large number of stars missing from its tail.

“We see that stars that belong to the nearest star cluster are moving in a way they should not be moving if we apply our known and widely used models,” according to study lead Tereza Jerabkova, a research fellow with the ESA. “Either these models are wrong and this would have big implications for physics, or the motions are changed due to a dark matter lump, and this would also be an important discovery.”

This “dark matter lump” Jerabkova refers to would have to be immensely massive—on the order of 10 million suns—and completely invisible, as there is no visible gas cloud or star cluster that could account for such a major disruption. This has led Jerabkova’s team to speculate that this invisible lump might be a substructure made up of a form of dark matter known as a sub-halo.

Dark matter is an invisible phenomenon that accounts for roughly four-fifths of the gravitational effect of the universe continually to eluding direct detection by scientists. It tends to emerge early in the galactic formation process, with lumps of this matter continuing to drift across the galaxies as universes unfold.

The study concluded that these missing stars haven’t been swallowed by a black hole, but rather “the orbits of the stars in the Galaxy are being affected/changed by the encounter,” according to Jerabkova.  While the disappearance of a star is distinctly unsettling, she says that the people of Earth don’t have to worry about getting too close to one of these invisible sub halos.

“Such an encounter is basically impossible—simply because the solar system is very small in comparison to the Hyades and its tails and thus the chances of a close meet-up with any massive lump (molecular cloud or dark matter) are extremely small,” she explains. Our own Solar System, being more than seven times the age of the stars in the Hyades cluster, left its natal cluster, and the sub-halo that would have been associated with it, long ago.

“The stars thus carry lots of information about the cluster’s birth conditions and its evolution,” she concludes. “On top of this, the shape and structure of the tail depends on the mass distribution of the galaxy and thus we can even constrain galactic potential by studying tidal tails!”

Subscribers, to watch the subscriber version of the video, first log in then click on Dreamland Subscriber-Only Video Podcast link.
2021-03-31
Previous Headline News Post: Within the Molecular Structure of COVID-19 Variants Lies the Key to Their Defeat
Next Headline News Post: 105,000 Year Old Calcite Crystals from the Kalahari Desert Upends Theories of the Origins of Human Culture