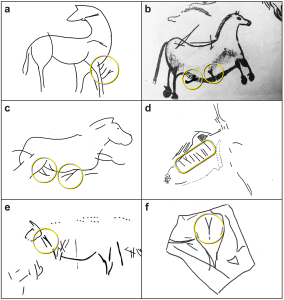 A U.K man  self-described as “effectively a person off the street” cracked the code of a primitive writing system developed by Paleolithic humans which reaches back at least 42,000 years. In so doing, this amateur archeologist revealed that ice-age humans were keeping track not only of animal’s life cycles, but also had invented an accompanying early system of timekeeping.

A furniture conservator by trade, London resident Ben Bacon was examining images of European cave art when he noticed that many depictions of animals therein were often enhanced by repetitive markings in the form of dots or short lines, along with a curious Y-shaped symbol (pictured above).  It occurred to Bacon that he was seeing some sort of code, and if it was an ancient written language, then it should be possible to decipher.

Attempts to decode the markings since these particular paintings were unearthed around 150 years ago assumed that they were a form of numerical notation, perhaps meant to convey the number of animals spotted or taken during a hunt; Bacon, however, felt that the markings depict a calendar system that was used to track life cycles of the animals.  His efforts to decode the enigmatic symbols led to a collaboration with archaeologists from Durham University and the University College London, including Paul Pettitt, an archaeology professor at Durham.

The team compared the numbers Paleolithic artists had applied to their menagerie of petroglyphs to what is known about birth cycles of these animals’ modern-day descendant, and found that the symbols corresponded to each individual species’ mating seasons when tracked according to lunar months.

This timekeeping method appears to have used lines and dots as the marking for the passage of this lunar calendar, with the annual cycle beginning in the spring; the Y-shaped symbol means, according to the study text, “To Give Birth”, and the placement of this symbol correlates apparently with the month or season that this animal mates or gives birth during.

“A great advantage of this calendar is that it is stable in describing the life-cycles of animals and plants despite great geographical and cultural differences in the European Upper Paleolithic.”

Their analysis included approximately 250 examples of these dot-and-line sequences that included the Y-shaped symbol, and over 600 examples without the “Y”, with most of the examples coming from caves in France and Spain. The paintings were made over a period of tens of thousands of years, and include what could amount to an entire zodiac of animals such as antelopes, aurochs, birds, bison, deer, fish, goats, horses, mammoths and rhinoceroses.

“The results show that Ice Age hunter-gatherers were the first to use a systemic calendar and marks to record information about major ecological events within that calendar,” Pettitt remarked. He said he was “glad he took it seriously” when Bacon contacted him with his new take on the markings; otherwise, the symbols might never have been properly deciphered.

“In turn, we’re able to show that these people, who left a legacy of spectacular art in the caves of Lascaux [France] and Altamira [Spain], also left a record of early timekeeping that would eventually become commonplace among our species,” Pettitt added.

In his interview with Vice Magazine, Bacon said that our Paleolithic forebears “are fully modern humans” that “were almost certainly as cognitively advanced as we are,” and “that their society achieved great art, use of numbers, and writing.” Bacon also added “that reading more of their writing system may allow us to gain an insight into their beliefs and cultural values.”

Subscribers, to watch the subscriber version of the video, first log in then click on Dreamland Subscriber-Only Video Podcast link.
2023-01-23
Previous Headline News Post: Pentagon Ordered to Review and Report on Eight Decades of UFO Documents
Next Headline News Post: The Spin of the Earth’s Core Has Changed Direction—at Least From Our Point of View