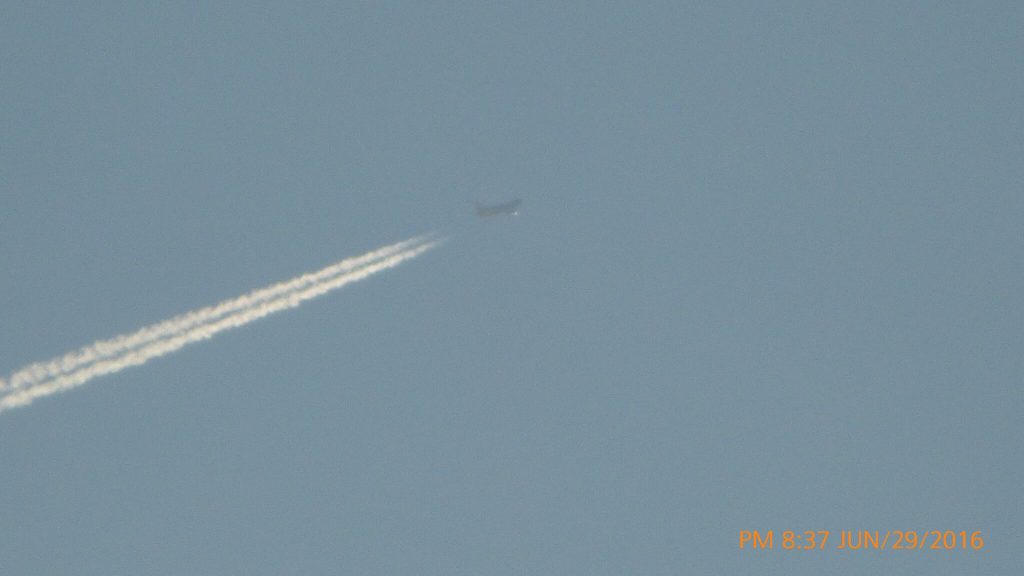 High-altitude aircraft contrails were recently found to be trapping more solar radiation than the carbon emissions emitted by the aircraft that form them, doubling the airline industry’s contribution to global warming. But the formation of these manmade clouds could be reduced by simply changing the flight level of a small portion of the world’s air traffic, according to a team of researchers.

Scientists at Imperial College London have found that by either raising or lowering the altitudes of some airliners by just 2,000 feet (610 meters), the adjustment could cut the climate impact of contrails by 59 percent. Between the average aircraft’s carbon emissions and radiative forcing from the resulting water vapor, this would reduce the global warming contributions to high-altitude aircraft by 30 percent.

Aircraft contrails are produced when the moisture in an aircraft’s exhaust cools and condenses on the accompanying carbon and sulfur compounds that are also produced by the engines, allowing them to form long clouds of ice crystals referred to as “contrail cirrus” by researchers. Depending on the conditions present, contrails can take up to 18 hours to dissipate, greatly affecting their contribution to climate change.

Although one might expect the presence of any cloud to be beneficial to counteracting global warming by reflecting sunlight back into space, water vapor is a powerful greenhouse gas, meaning that the effect of both natural and artificial clouds on climate change is a bit tricky, and highly dependent on their position in the atmosphere.

Clouds in the lower atmosphere tend to promote a cooling effect, due to their thick, reflective nature, readily bouncing solar radiation back into space; conversely, clouds high in the atmosphere, including high-altitude contrails, tend to be less dense and reflect less sunlight, so the water vapor in them absorbs more radiation than it reflects, resulting in a net warming effect. A study published in 2019 predicted that aircraft contrails will triple their effect on global warming by mid-century through increases in air traffic volume.

But a great deal of this impact could be mitigated if a simple change in aircraft altitude could reduce contrail formation in the first place. “According to our study, changing the altitude of a small number of flights could significantly reduce the climate effects of aviation contrails,” explains Imperial College London civil engineer Marc Stettler. “This new method could very quickly reduce the overall climate impact of the aviation industry.”

As an added bonus, Stettler’s team calculates that the altitude adjustments would only have to be applied to roughly 2 percent of worldwide flights, minimizing the impact on overall flight efficiency. “A really small proportion of flights are responsible for the vast majority of contrail climate impact, meaning we can focus our attention on them,” Stettler continues.

The change in altitude for the affected flights will mean slightly higher fuel consumption for the aircraft involved, but the decrease in contrail formation will offset the global warming potential added by the extra carbon emissions. The research team also predicts that if cleaner jet fuel were used by the airlines, the contrails’ effect on climate change could be reduced by as much as 90 percent.

Subscribers, to watch the subscriber version of the video, first log in then click on Dreamland Subscriber-Only Video Podcast link.
2020-03-13
Previous Headline News Post: NASA Finds a New Martian Biosignature—and a Good Place for It to Hole Up In
Next Headline News Post: Unknowncountry’s Coronavirus Response