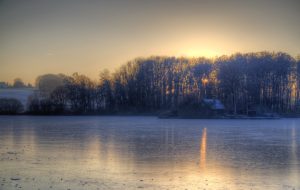 A winter heat wave has been baking Europe in summer-like temperatures in the days following the winter solstice, and despite suffering the worst drought in 1,200 years California is under a state of emergency due to flooding caused by record-breaking rains and snowfall.

Heat records have fallen across numerous European countries during the current heat wave, an event being caused by a high-pressure system over the Mediterranean and a low-pressure one over the Atlantic that circulated warm air from northwest Africa, exacerbated by a sea surface temperature that is almost 2C above normal, over continental Europe.

“I have never seen a forecast like this. Ever,” tweeted NASA climate scientist Ryan Stauffer, illustrating his post with a temperature anomaly map. “The climate implications are hard to ignore,” he added.

On the other side of the Atlantic, a confluence of atmospheric rivers at the end of 2022 brought record rainfall and powerful winds to northern California, causing localized flooding in San Francisco and the Sacramento Valley, resulting in at least 14 deaths and prompting President Joe Biden to declare a state of emergency on January 9. Further inland the system dropped heavy snow and rain on the Sierra Nevada Mountains that caused heavy flooding and mudslides.

“We saw 7.5 inches (19 centimeters) of snowfall in one hour, and that’s one of the highest snowfall rates as far as we can tell, that’s ever been recorded in the United States,” the lead scientist of the UC Berkeley Central Sierra Snow Lab, Andrew Schwartz, remarked regarding the snowfall seen in the mountains, where nearly three feet of snow fell over the first weekend of 2023. “A lot of people, and us included, are looking into that right now.”

Formed by winds associated with cyclonic activity, atmospheric rivers are currents of air that are 400 to 600 kilometers (250 to 375 miles) wide that, in the case of those crossing the Pacific, can carry a large volume of water with them; when the current system reached California it released its heavy precipitation.

Over the past several weeks this system brought somewhere between four to six times the amount of rainfall normally seen by California. “They come at you like a fire hose,” Bill Patzert, a climatologist at NASA’s Jet Propulsion Laboratory said, regarding the effect of atmospheric rivers.

San Francisco saw its second-wettest day on record with 13.9 centimeters (5.46 inches) of rain falling on December 31; a 24-hour rainfall record was set in Oakland on the same day at 12.1 centimeters (4.75 inches). With 90 percent of the state under a flood watch, evacuation orders were issued for the town of Montecito, and the counties of Santa Barbara and Ventura.

Subscribers, to watch the subscriber version of the video, first log in then click on Dreamland Subscriber-Only Video Podcast link.
2023-01-11
Previous Headline News Post: Humans Travelled the Seas 450,000 Years Ago, According to New Maps of Ancient Shorelines
Next Headline News Post: An Increase in UFO Cases Is Highlighted in the Pentagon’s Unclassified UAP Report for 2022