A Storm For the Ages Heads Towards America’s Gulf Coast 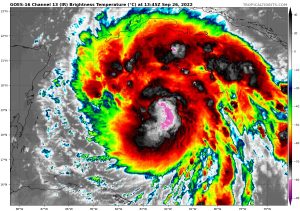 Tropical Storm Ian has rapidly intensified into a hurricane as he approaches the U.S, and a Florida forecaster warns that it could be the storm of a “lifetime.”

On Monday (September 26), evacuation orders were issued for some military personnel and residents as Ian whipped 80-mph winds and drew closer to Florida, CNN reports.

Residents of Florida may begin to feel the effects of Ian as early as Tuesday (September 27), according to the outlet. It is predicted that Ian will most likely become a major hurricane, unleashing winds of  more than 111 mph by the time the storm makes landfall.

A statement from the National Hurricane Center warns that “Rapid strengthening is expected during the next day or so, and Ian is forecast to become a major hurricane (Monday night) or early Tuesday when it is near western Cuba and remain a major hurricane over the southeastern Gulf of Mexico on Wednesday.”

There are a wide range of paths that Ian could follow, say weather forecasters.  If  it lands on Tampa, Florida; the occurrence would be the city’s first direct hit from a hurricane since 1921.

“The last major hurricane that actually made a direct hit was 100 years ago,” said meteorologist Rick Davis of the National Weather Service’s Tampa office. “So there’s a lot of people that have been brushed by hurricanes in the last five or 10 years in Florida.”

If the best case scenario occurs and Tampa is spared a direct hit, Tampa Bay is still vulnerable to storm surges which could likely cause catastrophic damage, according to CNN.

“We tell people even if they’re lifelong Floridians like myself, this is something that we haven’t seen in our lifetime,” Davis said. “So we definitely need to take it seriously.”

According to the hurricane center, “heavy rainfall, flash flooding, and possible mudslides” are also expected in parts of Jamaica and Cuba, as Ian makes its way through the eastern Gulf of Mexico and approaches Florida.

“Efforts to protect life and property should be rushed to completion,” CNN forecasters said.

Subscribers, to watch the subscriber version of the video, first log in then click on Dreamland Subscriber-Only Video Podcast link.
2022-09-26
Previous Headline News Post: It’s Official: No More UAP Videos Will Be Released by the US Navy
Next Headline News Post: Dubbed ‘Cosmics’ and ‘Phantoms’: The Skies Above Kyiv Appear to be Full of UFOs