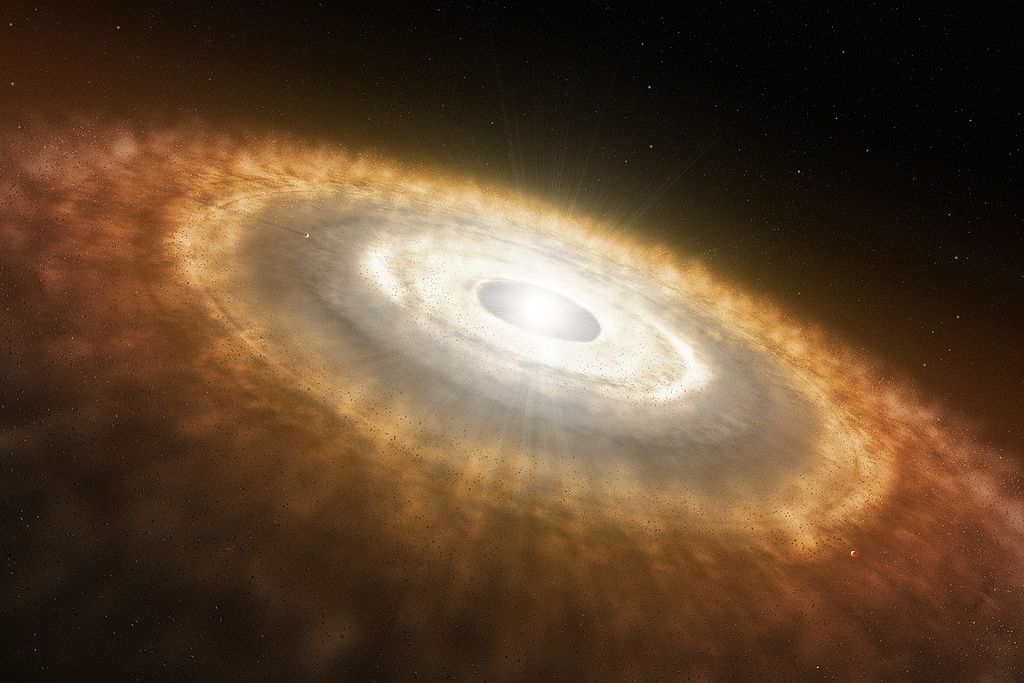 Astronomers have discovered the presence of what is the largest molecule yet detected in a protoplanetary cloud that surrounds a young star. While not expected to have been produced by biological means, this relatively complex organic compound could be a precursor to the formation of even larger molecules, including ones that could form the basis of biological life in this young system.

Although the molecule detected, dimethyl ether (DME, also known as methoxymethane), is only nine atoms in size, it represents the largest compound yet discovered in a protoplanetary disk. The disk, composed largely of millimeter-sized dust grains that are expected to clump together over time to form larger bodies such as asteroids, comets and planets, was discovered by the Atacama Large Millimeter/submillimeter Array (ALMA), and surrounds Oph-IRS 48, a young star roughly 440 light-years away in the constellation Ophiuchus. The cloud itself forms a crescent that wraps around the star, and has been found to also contain other compounds such as carbon monoxide and formaldehyde.

“It is really exciting to finally detect these larger molecules in discs,” according to study co-author Alice Booth, a researcher with the Netherland’s Leiden Observatory. “For a while we thought it might not be possible to observe them.”

Oph-IRS 48’s protoplanetary cloud was discovered in 2013 and has offered astronomers and astrophysicists an opportunity to observe a nursery for a future planetary system, showing that while gases and smaller dust particles form a disk around the star, the larger millimeter-to-centimeter-sized particles are forming the crescent-shaped cloud that orbits to one side of the system. Studying such young star systems can also offer insight into how our own system, and the life now present here, formed nearly five billion years ago.

“From these results, we can learn more about the origin of life on our planet and therefore get a better idea of the potential for life in other planetary systems,” explains study lead author Nashanty Brunken, a graduate student at Leiden Observatory. “It is very exciting to see how these findings fit into the bigger picture.”