A New Spin on a Classic Experiment Confirms Quantum Superposition 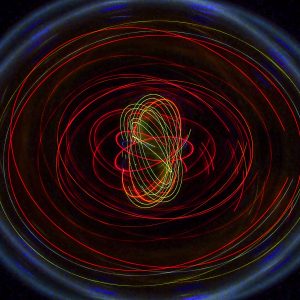 For decades, scientists researching quantum mechanics have studied the effect of quantum superposition, a state where a single particle can be in two places at the same time. Unfortunately, there has always been a problem when trying to measure the effect, since the very act of measuring a particle will interrupt such a state causing it to settle into a definite position. However, a team of scientists has performed a classical experiment that demonstrates the quantum effect–albeit one with a twist–that allowed them to measure particles while they were in superposition, confirming that the phenomenon is valid.

The method that was used is called the “double-slit” experiment: this is a simple exercise that involves firing a single sub-atomic particle, such as a photon or electron, at a screen that will be illuminated when the particle encounters it. However, in between the emitter and the screen is a plate that has two slits cut into it; under the rules of classical physics, the particle should only pass through one of the openings, but what actually happens is the single “particle” passes through both openings simultaneously as if it were a wave, creating an interference pattern on the screen where the peaks and troughs of the wave meet and either amplify or cancel each other out.

Although the concept of superposition is used to explain this effect, there was no way to directly confirm whether this was the case, because if one tries to measure what path the particle takes on its way through the openings its state of superposition is broken, and it appears to be in only one spot. Being unable to directly analyze the paths of the particles, researchers have had to rely on statistical models to determine these paths, illustrating them solely through mathematical means.

However, this new experiment allowed the researchers to measure the quantum effects applied to a beam of individually-split neutrons without breaking their states of superposition. More than 1,800 times more massive than the electrons that typically orbit them, neutrons are subatomic particles that have no charge, and with the exception of hydrogen, are found in the nuclei of all atoms. These neutrons were run through what is basically a modern version of a double-slit apparatus, but after being split one of the neutron beams was passed through a magnetic field that changed the spin of the particles, before being measured by a high-precision spin detector; this setup allowed the research team to directly measure the quantum state of each individual particle without breaking superposition, eliminating the need for a mathematical analysis to confirm the superposition effect.

“The results show that individual particles experience a specific fraction of the magnetic field applied in one of the paths, indicating that a fraction or even a multiple of the particle was present in the path before the interference of the two paths was registered,” the paper’s text explains. “The obtained path presence… is not a statistical average but applies to every individual neutron.”

If the results of this experiment are confirmed, this will put alternative theories regarding the effects demonstrated by the double-slit experiment to rest, and will cement the superposition theory as the most plausible explanation.

“When measuring a single particle, our experiment shows that it must have taken two paths at the same time and quantifies the respective proportions unambiguously,” according to team lead Dr Stephan Sponar, with the Atomic Institute at TU Wien.