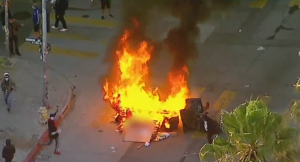 There are riots across the United States, with large crowds from coast to coast protesting the murder of George Floyd during an arrest. Whitley Strieber reports that there is extensive rioting in his town of Santa Monica, California. He states that he is currently safe, but that there is rioting and looting in the area and there are some fires nearby, mostly burning vehicles. He says, “I got as close as I thought was prudent before the curfew sent me home, but I was extremely careful as the police are not able to distinguish who is a rioter and who isn’t. Most of the people I saw were coming up from South LA. It is not a Santa Monica crowd. They have come here for the specific purpose of carrying out their protest in a quiet little community like this one.”

He has posted a journal entry with his thoughts about why this has happened and what we should do at this point. He adds, “the United States is in many ways, with COVID-19 and now this, in a worse situation than it was during World War II or during the Vietnam riots.” His journal entry speculates about the reasons that the murder of George Floyd appears to have been such a deliberate and intentional act, and so carefully videotaped. He says, “it seems to me that it may have been intended to incite riot at least by the officer who killed Mr. Floyd, if not the whole group of them.” To read his journal, click here.

Subscribers, to watch the subscriber version of the video, first log in then click on Dreamland Subscriber-Only Video Podcast link.
2020-05-31
Previous Headline News Post: Eight Official Hazard Reports Involving UFO Encounters Have Been Released by the U.S. Navy
Next Headline News Post: A ‘Hyperactive’ Hurricane Season Is Forecast for 2020, but How Do We Handle Mass Evacuations in the Era of COVID-19?