A Mysterious Abyss Opens on Jupiter, Threatening to Devour Your Imagination 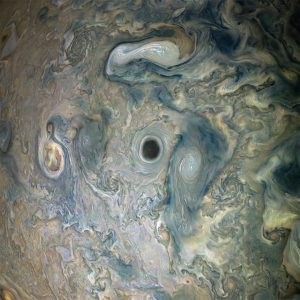 Although the planet Jupiter might be in the process of losing its famous Great Red Spot, it has recently gained a new feature that is baffling researchers, in the form of a large dark hole in its cloud tops that astronomers are calling ‘The Abyss’.

Revealed during the Juno space probe’s most recent pass over the region at the end of May, the Abyss is located in one of the giant planet’s jet streams at a latitude of 52° north. The new feature appears to be a hole or depression descending deep into the Jovian atmosphere, surrounded by a vortex of white clouds skirting its periphery.

“Since dark features on Jupiter’s atmosphere tend to run deeper than light features, the Abyss may really be the deep hole that it appears — but without more evidence that remains conjecture,” says NASA’s Astronomy Picture of the Day team in their June 10 post.

Juno’s orbit takes it closer to Jupiter’s cloud tops than any other space probe sent to the Jovian system, swooping as low as 4,200 kilometers (2,610 miles) in altitude, and photographed the Abyss a mere 15,000 kilometers (9,320 miles) above the mysterious void.

Juno is scheduled to make another pass over the region in July, and will hopefully gather more data that will offer new clues as to what’s going on deep in Jupiter’s clouds.