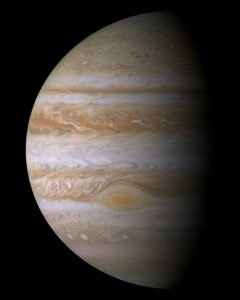 A recent study has revealed that the planet Jupiter devoured numerous smaller planets in the early days of the Solar System’s formation. This apparent cannibalism of its young siblings now sets to rest at least one debate regarding the formation of our system’s largest planet.

Four and a half billion years ago, the Solar System had more planets in it than what we see today: as the individual primordial planets gathered material from the protoplanetary disk they increased in mass; this change in mass altered their orbits, causing many of them to settle into orbits closer to the Sun in a phenomenon known as planetary migration. Their chaotic orbits all but ensured that they would eventually interact with one-another, with some encounters flinging at least a few of these worlds off into the dark depths of the outer Solar System—something that presumably happened to Planet Nine; some would collide with one-another, like the collision that may have happened between the early Earth and the hypothetical planet Theia that created the Moon.

And some, like Jupiter, may have been large enough to simply devour the planetesimals that ventured too close to the planetary behemoth. A new study drawing on data gathered by NASA’s Juno space probe has allowed researchers to map the composition of the rocky core that resides at the center of the giant planet; the study revealed that Jupiter’s core is made up of a surprising amount of heavy elements, suggesting that it absorbed numerous smaller planets early in its formation.

This finding also puts to rest a long-standing debate between two theories as to how Jupiter formed: one was that the planet formed directly from the hydrogen and helium of the early Solar System’s protoplanetary disk, in which case it would not have a rocky core but consist mostly of hydrogen—much of it compressed so much that it exists in a liquid metal state—all the way through the planet. But the presence of a rocky core suggests that Jupiter started out as a solid planet with enough mass to allow it to monopolize almost all of the hydrogen left over from the formation of the Sun.

The interior of a planet like the Earth can be indirectly studied by analyzing seismic waves that pass through the planet, waves that are refracted as they pass through materials of different density, allowing scientists to piece together a picture of the Earth’s interior. But since Jupiter lacks an accessible surface to place sensors on, the research team built a computer model that maps gravitational data gathered by the Juno and Galileo probes, allowing them to assemble a picture of the planet’s interior.

“Juno provided very accurate gravity data that helped us to constrain the distribution of the material in Jupiter’s interior,” explains lead researcher Yamila Miguel, an astrophysicist at Leiden University in The Netherlands. “It is very unique data that we can only get with a spacecraft orbiting around the planet.”

They found that there is a solid core at the center of Jupiter that is between 11 and 30 Earth masses (Jove was one hungry baby!), making up between three to nine percent of Jupiter’s overall mass, a higher proportion than what was originally expected.

The team hopes that further research will also shed new light on the formation of the other planets that make up the Solar System today: did the other gas giants, Saturn, Uranus and Neptune, also start out as rocky planets? And how did the presence of the primordial Jupiter affect the other rocky planets like Earth and Mars?  “Jupiter was the most influential planet in the formation of the solar system,” according to Miguel.

Subscribers, to watch the subscriber version of the video, first log in then click on Dreamland Subscriber-Only Video Podcast link.
2022-07-06
Previous Headline News Post: A Baby Mammoth Has Been Recovered From the Arctic, Only the Second Such Find in History
Next Headline News Post: Recent Findings Regarding Convergent Evolution May Mean Many of Our Evolutionary Trees Are Wrong